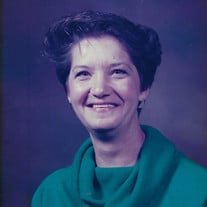 Ruth (Bowling) Mann, daughter of the late William Albert and Lula Ellen (Beals) Bowling, was born December 19, 1945 in Buckhorn, Missouri. She went home to be with her Lord on Sunday, August 4, 2019 in the Phelps Health Hospital in Rolla, Missouri having attained the age of 73 years. On June 4, 1965, Ruth was united in marriage to the love of her life, Franklin I. Mann in Buckhorn, Missouri. They enjoyed 54 wonderful years together and were blessed with two sons: Tim and Kenny. Ruth began working at General Leonard Wood Army Community Hospital and retired after 29 years of service as Head of Medical Records. Ruth enjoyed spending time with her family and friends, especially the grandchildren. She was a pro and avid player of Rummy and Mexican Golf and enjoyed challenging her family and friends to play with her. She also enjoyed shopping from time to time. Ruth was a wonderful friend to everyone that she came into contact with and was always saying how thankful she was for her forever friends. Ruth was deeply loved by all those who knew her. Ruth leaves to cherish her memory, her husband: Frank Mann of Waynesville, MO; two children: Tim Mann of Buckhorn, MO and Kenny Mann (Ronda) of Waynesville, MO; five grandchildren: Tabatha Mann (Joe) of Columbus, NJ, Austin Mann of Destin, FL, Nick Mann (Char) of Waynesville, MO, Sabrina Killough (Troy) of Madisonville, KY and Katie Mann of Waynesville, MO; several nieces, nephews, other relatives and friends. In addition to her parents, Ruth was preceded in death by her in-laws: Henry and Mary Mann; sister: Ellen and husband Roy Cogar; brothers: Jim, Bill, Henry and Rick Bowling; and her puppy: Princess. Ruth will be sadly missed and fondly remembered by all who knew and loved her. Funeral services were held at 10:00 a.m. Wednesday, August 7, 2019 in the Memorial Chapels and Crematory of Waynesville with Pastor Danny Graves officiating. The songs “The Old Violin” by Johnny Paycheck, “Amazing Grace” by Josh Turner and “I’ll Fly Away” by Alan Jackson were played. Serving as escorts were Nick Mann, Austin Mann, Ronnie Bowling, Tommie Bowling, Bryan Cogar and Steven Cogar. Serving as honorary escorts were Dean Cogar, Donnie Cogar, Harvey Phinney, Justin Bowling, Joe Bannister, JD Bowling and Brenden Bowling. Burial followed in the Idumea Cemetery of Laquey, Missouri. Memorial contributions may be made in memory of Ruth Mann to the Laquey School Student Lunch Program and may be left at the funeral home.

Ruth (Bowling) Mann, daughter of the late William Albert and Lula Ellen (Beals) Bowling, was born December 19, 1945 in Buckhorn, Missouri. She went home to be with her Lord on Sunday, August 4, 2019 in the Phelps Health Hospital in Rolla, Missouri... View Obituary & Service Information

The family of Ruth (Bowling) Mann created this Life Tributes page to make it easy to share your memories.

Ruth (Bowling) Mann, daughter of the late William Albert and...