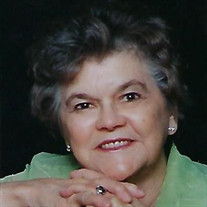 Ruth Alice Moise, daughter of the late Elbert William and Bonnie (VanNoy) Bedwell, was born March 4, 1933 in Bernie, Missouri. As a young girl, Ruth grew up in St. Louis where she attended Washington and Arlington schools. On May 5, 1950, Ruth was united in marriage to Richard James Moise. They shared many wonderful years together and were blessed with two sons: Ricky and Roy. Ruth was a hardworking woman and took great pride in helping to provide for her family. She worked at Bell telephone, worked as a beautician, served as a waitress at the Diamonds Restaurant in Gray Summit and also owned and operated a hotel. In her later years, she was a babysitter for her grandchildren. In her spare time, she enjoyed playing Solitaire, Rummikub, Mastermind and other games. Her number one priority was her family. She loved being with them and watching her grandchildren and great grandchildren grow up and start families of their own. As long as she was able, Ruth was always making sure that her family was fine financially. She had one of the biggest hearts you would ever find. She loved her family dearly. Ruth had made a profession of faith earlier in her life and was a member of the First Baptist Church of St. Robert for a time. Even though her health did not permit her to attend church, she read her Bible faithfully and was a student of the Word. Ruth went home to be with her Lord Tuesday, October 8, 2019 in the Life Care Center of Waynesville having attained the age of 86 years. She will be sadly missed, but fondly remembered by all those who knew and loved her. Ruth will be sadly missed but fondly remembered by all those that knew and loved her. She leaves to cherish her memory, two sons: Ricky J. Moise of Dixon, MO and Roy William Moise of St. Robert, MO; one brother: Wayne Bedwell of Chesterfield, MO; one sister: Geraldine Nevinger of Chesterfield, MO; eight grandchildren; nineteen great grandchildren; one great-great grandchild on the way; several nieces, nephews, other relatives and friends. In addition to her parents, Ruth was preceded in death by her husband; one brother: Ray Bedwell; one sister: Helen Moore; and one grandson: Michael Moise. Services were held at 6:00 p.m. Sunday, October 13, 2019 in the Memorial Chapels and Crematory of Waynesville / St. Robert with Pastor Mike Prater officiating. The songs “In the Garden”, “Amazing Grace”, “The Old Rugged Cross” and “Go Rest High on that Mountain” were played. Private family burial was held in the Sunset Memorial Estates Cemetery of Waynesville. Memorial contributions may be made in memory of Ruth Moise and may be left at the funeral home.

Ruth Alice Moise, daughter of the late Elbert William and Bonnie (VanNoy) Bedwell, was born March 4, 1933 in Bernie, Missouri. As a young girl, Ruth grew up in St. Louis where she attended Washington and Arlington schools. On May 5,... View Obituary & Service Information

The family of Ruth Alice Moise created this Life Tributes page to make it easy to share your memories.