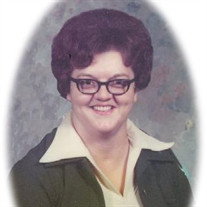 Ruthane E. DeKorsey, daughter of the late Melvin H. Crecelius Sr. and Virginia D. (Plaisted) Crecelius, was born November 25, 1940 in St. Louis, Missouri. She passed away on Friday, August 15, 2014 in the Life Care Center of Waynesville, Missouri having attained the age of 73 years, 8 months and 21 days. Ruthane spent her entire childhood in St. Louis and graduated from high school. She met the love of her life, Thomas DeKorsey, a United States Army soldier and they were united in marriage on December 21, 1963. They shared over 50 years of marriage together and were blessed with two children: Thomas and Robert. Thomas preceded her in death on August 10, 2014. Due to Thomas being in the military, Ruthane and the family moved several times, but in 1974, they came to the Fort Leonard Wood area. Thomas retired from the military in 1977 and the family decided to stay in the Waynesville area. Most of her life, Ruthane was able to stay at home and raise her two boys. She loved to care for her home and family. In her spare time, she enjoyed reading, but most importantly, she loved spending time with her grandchildren. Even though she is gone from our sight, Ruthane will always be alive in our hearts. Ruthane leaves to cherish her memory, two sons: Thomas and Robert DeKorsey; daughter-in-law: Rebecca DeKorsey; two grandchildren: Brenden and Colby; one brother: Melvin H. Crecelius, Jr. (Barbara) of St. Louis, MO; one sister: Judy Lee Maquire of St. Louis, MO; numerous nieces, nephews, other relatives and friends. Funeral services were held at 1:00 p.m. Friday, August 22, 2014 in the Memorial Chapels and Crematory of Waynesville / St. Robert with Rev. Christopher Hendrix officiating. The song “Amazing Grace” was played and serving as escorts were family and friends. Burial followed in the Missouri Veterans Cemetery of Waynesville, Missouri.

The family of Ruthane E. DeKorsey created this Life Tributes page to make it easy to share your memories.