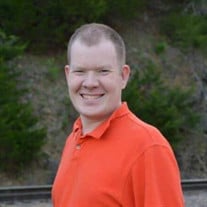 Ryan Alexander Thorson, son of Donald Lee and Kelley Jean (Salisbury) Thorson, was born October 26, 1988 in Panama City, Panama. He passed away Wednesday, May 22, 2019 in the University of Missouri Hospital and Clinics of Columbia, Missouri having attained the age of 30 years. After moving from Panama, Ryan and the family moved to Dugway, Utah. In 1995, they moved to Ft. Sam Houston, Texas and in 1997 moved to Fort Leonard Wood, Missouri. Ryan attended Pick Elementary School on Fort Leonard Wood and then transitioned to East Elementary in Waynesville. He spent the rest of his school years in the Waynesville R-VI School District and graduated from Waynesville High School with the Class of 2008. Ryan was very active and from the age of 4-15, Ryan played soccer and basketball. He enjoyed sports very much and his favorite sports team was the Patriots. He loved going fishing with his friends at the Roubidoux, the Gasconade River or at Osage Beach. He was an animal lover, but especially enjoyed dogs. He was a Boy Scout and became an Eagle Scout. Ryan loved his family dearly and enjoyed having some “guy time” with his brothers Brandon and Kyle. Ryan worked for Walmart in the Maintenance Department for 15 months where he made many friends before his health started to decline in 2015. Ryan had 2 kidney transplants; one in 2010 and one in 2013. Ryan was a very caring person and would give the shirt off his back. He would stop to pick up anyone he knew that was walking on the side of the road. Ryan was always the designated driver for his friends because he was always a very dependable person and friend. Ryan was a great supporter to many friends that were struggling. His support meant so much to his friends and his understanding and supportive ways led to life-long friendships. Ryan will be sadly missed, but fondly remembered by all those who knew and loved him. He leaves to cherish his memory, his parents: Donald and Kelley Thorson of St. Robert, MO; two brothers: Brandon Thorson of Freeburg, MO and Kyle Thorson of St. Robert, MO; grandmother: Marlene Vaughan (Gene) of St. Robert, MO; several aunts, uncles, other relatives and friends. Ryan was preceded in death by grandparents: Virginia and Harold Thorson, Delbert Salisbury and Joe Bruns. A Celebration of Life Service was held at 1:00 p.m. Sunday, June 2, 2019 in the Waynesville City Park of Waynesville, Missouri with Sarah Ransome serving as speaker. The songs “Where Did You Go” by Ahsley Parker Angel and “Over the Rainbow” by Eva Cassidy were provided. Memorial contributions may be made in memory of Ryan Thorson at KIFIA.org or NephCure.org or may be left at Memorial Chapels and Crematory of Waynesville / St. Robert.

Ryan Alexander Thorson, son of Donald Lee and Kelley Jean (Salisbury) Thorson, was born October 26, 1988 in Panama City, Panama. He passed away Wednesday, May 22, 2019 in the University of Missouri Hospital and Clinics of Columbia, Missouri... View Obituary & Service Information

The family of Ryan Alexander Thorson created this Life Tributes page to make it easy to share your memories.