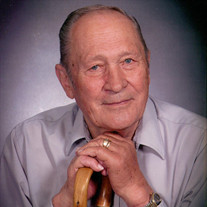 Richard Gottfried, son of the late Jakob and Anniela Gottfried, was born on November 12, 1928 in Rava Ruska, Poland. As a young boy, Richard grew up in various places in Europe, Poland and France during the difficult years of World War II. He learned to speak six different languages during that time. In 1954, Richard was asked to be a United States soldier by a recruiter. So in 1956, Richard came to the United States and served the United States Army and retired in 1975 after 20 years of faithful service. He earned the rank of Sergeant First Class and earned several awards and commendations; some of which include the National Defense Service Medal, Army Commendation Medal (1st Oak Leaf Cluster), Republic of Vietnam Campaign Medal w/60 device, Good Conduct Medal (6th Award), Vietnam Service Medal w/1 Silver Service Star and Vietnam Service Medal w/1 Bronze Service Star, Bronze Star Medal (V-Device) and Purple Heart, along with several others. During his military career, Richard served in Korea, Vietnam (2 tours) and was an honor guard in Washington, D.C. and served as an honor guard at John F. Kennedy’s and General Douglas MacArthur’s funeral services. In 1957, Richard was united in marriage to Betty Ford in Colorado and they shared 50 years of marriage together before she preceded in him death in 2007. They were blessed with three children: Anniela, Steven and John. In 2009, Richard was united in marriage to Mildred (Gallion) Sanders in Waynesville, Missouri and they shared many wonderful memories together. Richard loved animals, even while stationed in Vietnam he found a cat and brought it into the barracks. In later years, he said that he enjoyed “aggravating” Betty and Mildred. He was a member of the Masonic Lodge and served as Deacon at the Berean Baptist Church where he was a faithful member. Richard went home to be with his Lord Wednesday, February 28, 2018, in the Life Care Center of Waynesville, Missouri having attained the age of 89 years. He will be sadly missed, but fondly remembered by all those that knew and loved him. He leaves to cherish his memory, his wife: Mildred Sanders-Gottfried of the home; two children: Anniela Gottfried of Richland, MO and John (Kristy) Gottfried of McAllen, TX; three step-children: Donnie (Katie) Sanders of Waynesville, MO, Dorothy (Denny) Marr of Republic, MO and Phyllis (Clyde) Winfrey of Richland, MO; grandchildren: Sarah Gottfried-Caulk (Edmund), Nancy Gottfried and Ashley Fleming (Ralph), two great grandchildren: Rylee and Ryker Fleming, along with several other grandchildren, great grandchildren and other relatives and friends. In addition to his parents and first wife, Richard was preceded in death by one son, Steven Gottfried. Services were held at 10:00 a.m. Saturday, March 3, 2018 in the Berean Baptist Church of Waynesville with Pastors Mike Hawkins and Chris Hendrix officiating. Denny Marr led the congregation in singing “Victory in Jesus” and was accompanied by Dorothy Marr as he sang “In the Garden”. Serving as escorts were the United States Army. Burial with military honors followed in the Oaklawn Cemetery of Richland, Missouri. Denny Marr sang “They’ll Know We Are Christians by our Love” and the United States Army of Fort Leonard Wood rendered honors. Services were under the direction of Memorial Chapels and Crematory of Waynesville / St. Robert. Memorial contributions may be made in memory of Richard Gottfried to the Berean Baptist Church and may be left at the funeral home.

Richard Gottfried, son of the late Jakob and Anniela Gottfried, was born on November 12, 1928 in Rava Ruska, Poland. As a young boy, Richard grew up in various places in Europe, Poland and France during the difficult years of World War II.... View Obituary & Service Information

The family of SFC (Ret) Ryszard "Richard" Gottfried created this Life Tributes page to make it easy to share your memories.

Richard Gottfried, son of the late Jakob and Anniela Gottfried,...