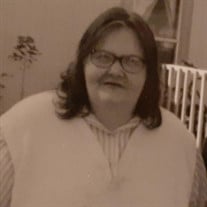 Sadie “Sissy Mae” Henderson, daughter of the late Edward Wright Henderson and Sadie Evelyn (Brown) Henderson, was born January 23, 1961 in Waynesville, Missouri. Except for a few years in St. James, Sissy Mae has spent the majority of her years in Pulaski County in the Laquey community. She worked at the Sheltered Workshop in Crocker and Richland for several years. Sissy Mae enjoyed cooking, crocheting, collecting dolls, and listening to music on her radio. She loved spending time with her family and friends, especially her nieces and nephews. Sissy Mae passed away Tuesday, February 16, 2021 in the University of Missouri Health Center, Columbia, Missouri having attained the age of 60 years. She will be sadly missed, but fondly remembered by all those that knew and loved her. Sissy Mae leaves to cherish her memory, her brothers: Ernest Henderson, Russell Henderson, Bill Henderson and his wife, Rhonda, and Shorty Henderson and his wife, Elizabeth all of Laquey, MO, Lloyd Henderson of Marshall, MO, Bobby Henderson and his wife, Liz of Richland, MO, and Danny Randolph and his wife, Paula of Dixon, MO; several nieces, nephews, other relatives, and many friends. Even though she is gone from our sight, her loving spirit will live on in our hearts forever. Celebration of Life services were held at 10:00 a.m. Saturday, March 6, 2021 in the Memorial Chapels and Crematory of Waynesville / St. Robert with Pastor Danny Graves officiating. The songs “When the Roll is Called Up Yonder” and “Amazing Grace” by Alan Jackson, “Jealous of the Angels” by Donna Taggart, and “Dancing in the Sky” by Dani & Lizzy were played. Burial followed in the Deerlick Cemetery of Waynesville. Memorial contributions may be made in memory of Sadie “Sissy Mae” Henderson and may be left at Memorial Chapels and Crematory of Waynesville / St. Robert.

The family of Sadie "Sissy Mae" Henderson created this Life Tributes page to make it easy to share your memories.