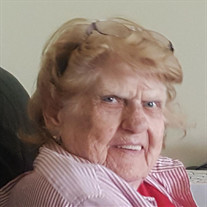 Sally Frances Amos was born to the union of the late Omer Newton and Ona May (Chambers) Young, on August 4, 1928 near St. George, Missouri. She was the baby of seven girls before the sons came along. She passed away on Thursday, December 20, 2018 in the Cox Medical Center, South of Springfield, Missouri having attained the age of ninety years. On June 10, 1953, Sally was united in marriage to James Lavern Amos in Mountain Grove, Missouri and to this union four daughters and two sons were born: Sally Marie, Martha, Margaret, Margie, James L. and Joseph. Due to James being in the military, he and Sally moved to San Antonio, Texas for a short time before coming back to Lebanon. In 1961, they bought the family farm near Oakland and they had many happy memories on the farm. Sally had made a profession of faith in her younger years and was a member of the Antioch Baptist Church where she was very involved until her health began to decline. She served as a Sunday School teacher and loved to help with church dinners. Sally’s two main passions in her life were her church and her family. She took great pride in providing for her family and seeing to their needs. She was a wonderful cook and loved making big dinners for the hay hands that came to help during hay season. She was known for her cinnamon rolls, angel food cake, homemade bread, hot chocolate and had the best Sunday dinners for her family and any others that would come by the house. Sally had the gift of hospitality and anyone was welcome to come and eat or just to stop by for a visit. She also enjoyed being outdoors working in her gardens, raising chickens and helping on the farm. She was very talented with crocheting and loved to make gifts for her family and friends. But most importantly, she loved spending time with her family, especially the grandchildren and great grandchildren. Sally leaves to cherish her memory, her four daughters, Sally Marie McGuire (Jim) of Lebanon, MO, Martha Jemes of Lebanon, MO, Margaret Dickinson (Kennie) of Camdenton, MO, and Margie Faiferlick of Camdenton, MO; two son, James L. Amos II (Elaine) of Lebanon, MO, and Joseph Amos (Cheryl) of Lebanon, MO; thirteen grandchildren: Chris McGuire (Gina) of Nashville, TN, Jinger Woolley (Clay) of Springfield, MO, Jonathan McGuire (Amy) of Rockaway Beach, MO, JoHana Rosalis McGuire (Alexis) of San Salvador, El Salvador, Randy Tasker of Lebanon, MO, Rob Tasker of Springfield, MO, Thomas Jemes (April) of Sparta, MO, Sarah Wilson (Brandon) of Lebanon, MO, Angela Kirkland (Mike) of Lebanon, MO, Kendra Neves (Jeff) Mandeville, Louisiana, Josh Titus (Megan) of Lebanon, MO, Jessica Titus (fiancé Steven Bennett) of Lebanon, MO and Jackie Mathany (Jedidiah) of Camdenton, MO; twenty-three great-grandchildren; two brothers, Tom Young of Hartville, MO and Russell Young (Imogene) of O’Fallon, MO; a sister-in-law, Carol Young of St. Charles, MO; a number of nieces and nephews; as well as a host of other relatives and friends. In addition to her parents, Sally was preceded in death by her husband, James Amos; one daughter-in-law: Teresa L. Amos; and two sons-in-law: Neil Faiferlick and Farrell Jemes; and eight siblings: Elizabeth Gourley (Marion), Kathleen Bramhall (Raymond), Alma Headley (Sam), Ruby Davis, infant Ruth Young, Ila Mae Venable (Garland), Alice Royster (Doyle), and John Young; one sister-in-law: Wanda Young. Funeral Services will be held at 1 p.m. Wednesday, Dec. 26, 2018, in Antioch Baptist Church near Lebanon. Burial will follow in Mt. Rose Memorial Park Cemetery, under the care and direction of Waynesville Memorial Chapel and Holman-Howe Funeral Home of Lebanon. Memorial Contributions in memory of Sally Amos will be used to further the Gospel through the Antioch Baptist Church and may be left at the funeral home or at the church.

Sally Frances Amos was born to the union of the late Omer Newton and Ona May (Chambers) Young, on August 4, 1928 near St. George, Missouri. She was the baby of seven girls before the sons came along. She passed away on Thursday, December 20,... View Obituary & Service Information

The family of Sally Frances Amos created this Life Tributes page to make it easy to share your memories.

Sally Frances Amos was born to the union of the late Omer Newton...