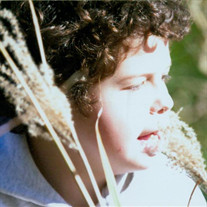 Samuel Don Hicks was born on February 14, 1997 at Cox South in Springfield, Missouri. Sam grew up at the Hicks Farm in Laquey, Missouri where he lived his whole life. Sam attended Laquey R-V School until May of 2014 when he graduated. Sam spent his short time on Earth working on the people who surrounded him. He built strength within his family that can never be broken down. He always did a great job making people smile, tearing up toys, and going through batteries. Sam taught us the highest level of patience, appreciation, and love. If there was a bag of Cheetos and a bag of $100 bills sitting in front of Sam, he would pick the Cheetos every time. Sam left a special mark on everyone that was lucky enough to meet him. He was a precious gift whose love was undeniable. He had a squeeze hug that literally lifted you off the ground. There will never be another guy like Sam. Sam loved hanging out with the boys getting dirty, hauling hay, riding around in loud trucks, going for four wheeler rides, float trips, and feeding the cows with Dad. If it had four wheels and a noisy motor, Sam was all about it. Sam also loved his snacks, especially cheesy food and cashew nuts! Most of all, he loved back scratches from his momma. Sam never let her get too far out of his sight. Sam had a love for life and his people that can never be replaced. His contagious laugh and intoxicating smile warmed the heart and fed the soul. He spoiled us with affection that filled even the smallest empty space or ache within. He wasn’t just a little ray of sunshine, he was the entire planet. Sam passed away Wednesday, October 26, 2016 in his home having attained the age of 19 years. He will be sadly missed, but fondly remembered by all those that knew and loved him. Sam leaves to cherish his memory, his parents: Kent and Tammy (Wieners) Hicks of Laquey, MO; two sisters: Jordan (Hicks) Rivard and husband Jesse of Richland, MO and Billie Hicks and fiancé Wade Steward of Richland, MO; maternal grandmother: Zella Wieners of Waynesville, MO; paternal grandmother: Neva Hicks of Richland, MO; uncle: Roger Hicks of Fort Worth, TX; aunt: Janet Hicks of Fair Grove, MO; aunt Mary Hendrix of Laquey, MO; aunt and uncle: Jennifer and Keith Watson of Richland, MO; special uncle/cousin: Randy Hicks of Waynesville, MO; numerous cousins, other relatives and friends. Sam was preceded in death by an aunt: Florence Wieners; uncle: James Darold Wieners, Jr.; grandfather: James Darold Wieners, Sr.; and grandfather: Don Hicks. Services were held at 10:00 a.m. Saturday, October 29, 2016 in the Memorial Chapels and Crematory of Waynesville / St. Robert. Sam’s loving helpers, Monique Stokes, Georgia White and Virginia Jefferies recalled their wonderful memories of Sam. Becky Lercher led the congregation in singing “Mansion Over the Hilltop” and “I’ll Fly Away”. The song “Uncloudy Day” by Willie Nelson was played. Serving as escorts were Uncle Roger Hicks, Uncle Keith Watson, Randy Hicks “Randyman”, Mike Gray, Darrell Davis, Jesse Rivard and Wade Steward. Burial followed in the Nicks Cemetery of Pulaski County, Missouri. Matt Mills sang “You Are My Sunshine”.

Samuel Don Hicks was born on February 14, 1997 at Cox South in Springfield, Missouri. Sam grew up at the Hicks Farm in Laquey, Missouri where he lived his whole life. Sam attended Laquey R-V School until May of 2014 when he graduated.... View Obituary & Service Information

The family of Samuel Don Hicks created this Life Tributes page to make it easy to share your memories.