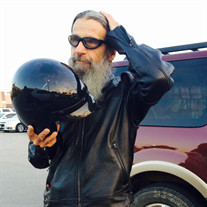 Samuel Aubrey McGuffee, Jr., son of Samuel Aubrey McGuffee and Elfride Walburga (Stoeberlein) McGuffee, was born September 16, 1953 in Munich, Germany. Due to his father being in the military, Sam lived at several different duty stations. He graduated from Waynesville High School in 1971. In March 1973, Sam entered the United States Air Force and served his country faithfully until his honorable discharge in March 1977. Sam proudly served his country and earned the rank of Sergeant. After leaving the military, Sam returned to Richland and began his career with the US Postal Service in Fort Leonard Wood, Missouri. Sam served for over 30 years with the postal service and he worked there until his passing. On April 19, 1985, Sam married Annette Watson and they were blessed with two daughters: Samantha and Simone. Sam enjoyed being outdoors while going on float trips with his family and friends and riding his motorcycle. He was an avid St. Louis Blues hockey fan, enjoyed playing pool and was a big music fan. He was a frequent visitor of Roadhouse Bar & Grill and Waffle House. Most importantly, Sam loved spending time with his family. Sam was a member of the Freedom of the Road Riders, American Postal Workers Union and the Roadhouse Bar & Grill pool league member. Sam made a profession of faith and was baptized at First Baptist Church of St. Robert, Missouri. Sam passed away Saturday, March 12, 2016 in the Cox Medical Center South of Springfield, Missouri having attained the age of 62 years, 5 months and 26 days. He will be sadly missed, but fondly remembered by all those that knew and loved him. Sam leaves to cherish his memory, two daughters: Samantha Barnes (Travis) of Crocker, MO, and Simone McGuffee of Springfield, MO; his father: Samuel McGuffee, Sr., of Cape Girardeau, MO; four siblings: Linda Carter (Bill) of Ozark, MO, Annie Willis (David) of Cape Girardeau, MO, Susie Hildebrand (David) of Cape Girardeau, MO and Austin McGuffee (Debbie) of Springfield, MO; two grandsons: Jeremiah Garner and Wyatt Barnes, both of Crocker, MO; close friend: Annette Watson of Waynesville, MO; nieces and nephews: Erin Boyer (Trey) of Jackson, MO, Justin McGuffee of Springfield, MO, Jennifer Shannon (Eric) of Beaumont, TX, Ashley Hughes (Jesse) of Jonesboro, AR and Jamie McGuffee of San Diego, CA; other relatives and friends. Sam was preceded in death by his mother, Elfride McGuffee. Services were held at 7:00 p.m. Thursday, March 17, 2016 in the Memorial Chapels and Crematory of Waynesville / St. Robert with Rev. Chris Hendrix officiating. The songs “Wildflowers” by Tom Petty, “Ramble On” by Led Zeppelin, and “Wish You Were Here” by Pink Floyd were played. Inurnment was held at 9:00 a.m. Friday, March 18, 2016 in the Missouri Veterans Cemetery of Springfield, Missouri with military honors being provided by the Missouri Honors Team. Memorial contributions may be made in memory of Sam McGuffee and may be left at the funeral home.

The family of Samuel Aubrey McGuffee, Jr. created this Life Tributes page to make it easy to share your memories.