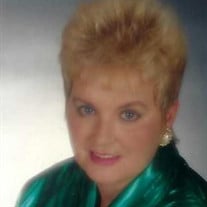 Sandra Kay Beery arrived into this world on June 27, 1944, in Richland, Missouri, to John Milford Helms and Frieda “Cleo” (Robertson) Helms. Sandra grew up in various places such as, Springfield, Newburg, and Lebanon, due to her father’s employment with the railroad. Sandra graduated from Parkview High School in Springfield, Missouri. After school Sandra began working for Blair Cedar in Camdenton, Missouri as a packer. She truly enjoyed her job and looked forward to going in each day. However, the love Sandra had for children aided in her decision to open up her own childcare service from her home for many years…some even second generation until her health failed and she sadly could no longer take care of the children that brought her such great joy. Sandra kept busy though finding time to sew, quilt, crochet, and attend TOPS. Sandra made a profession of faith and was a much-loved member of First Baptist Church of Richland. There, she worked in the nursery for several years. She also helped out in other areas where needed. Her joy filled heart made it a blessing to be around Sandra. Afterall, she’d never met a stranger in her life! She was funny, and full of sassiness and could be found chatting with anyone nearby and made a lot of friends throughout her life. On Saturday, October 16, 2021, while in Health Care South of Lebanon, Missouri, Sandra went home to heaven joining other beloved family who’d gone on before her having attained the age of 77. She was preceded in death by her parents, John & Cleo Helms, one infant daughter, Carrie Lynn Beery, one brother, John Russell Helms, one sister Virginia Mae "Jenny" Johnson & her husband, Harold, & one sister-in-law, Betty Helms. Sandra leaves behind to cherish her memory one precious daughter: Tina Marie Beery (Nick Harward) of Lebanon, MO; two brothers: Dennis Helms (Leah) of Richland, MO, and Tony Helms (Chris) of Camdenton, MO; 4 grandchildren: Brandon, Reegann, Kendal, & Rylan; 2 great-grandchildren: Christopher and Marijane; several nieces, nephews, and other relatives and friends. Sandra loved her family and friends. She was a devoted daughter, sister, aunt, mother, grandmother, and friend. She found contentment in whatever situation God placed her in, trusting in Him for her every need. Sandra let her light shine while in this life as she shared the good news of Jesus. She will certainly be missed by those who knew and loved her. Services were held at 2:00 p.m., Thursday, October 21, 2021, in the Memorial Chapel of Richland with Pastor Bob Lilly officiating. Songs included “Go Rest High On that Mountain,” “How Great Thou Art,” and “Old Rugged Cross.” Serving as escorts were Dennis Helms, Tony Helms, Tyler Helms, Russell Hobbs, John Shortell and Nick Harward. Burial followed in the Oaklawn Cemetery of Richland, MO. Services were under the care and direction of Memorial Chapel of Richland. Memorial contributions may be made in memory of Sandra Kay (Helms) Beery to the First Baptist Church of Richland Scholarship Fund and may be left at the funeral home. Online condolences can be sent at www.memorialchapelsandcrematory.com

Sandra Kay Beery arrived into this world on June 27, 1944, in Richland, Missouri, to John Milford Helms and Frieda &#8220;Cleo&#8221; (Robertson) Helms. Sandra grew up in various places such as, Springfield, Newburg, and Lebanon, due to her... View Obituary & Service Information

The family of Sandra Kay (Helms) Beery created this Life Tributes page to make it easy to share your memories.