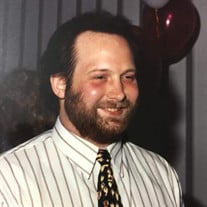 Scott Richard Ernst, 55, of Cedar Rapids, died of a sudden-heart attack on Friday, April 20, 2018, while at work in Cedar Rapids, Iowa. A visitation will be held from 5-7 pm Tuesday, April 24, 2018 at Cedar Memorial Park Funeral Home with sharing of memories beginning at 5:30 pm. A service will be held Friday, April 27, 2018 from 4-6 pm at Waynesville Memorial Chapel in Waynesville, Missouri, followed by a private family graveside at Sunset Memorial Estates Cemetery in Waynesville. Scott was born December 31, 1962 in Emmetsburg, Iowa, before moving to Waynesville, Missouri with his family during his eighth grade school year. He graduated from Waynesville High School with the Class of 1981. He attended the University of Missouri- Rolla, renamed Missouri S&T, and graduated with a degree in electrical engineering. Following graduation, Scott began his career at Rockwell Collins in Cedar Rapids, Iowa, where he worked until his final day. He served as a Principal RF Engineer, being an expert for the organization. Scott held a patent in microwave technology. He was loved and enjoyed by all his co-workers. Scott was a life-long learner. When he wasn’t at work, he could always be found with a book or research family genealogy for not just his family, but his friends’ families as well. Scott was known by many as a “Gentle Soul” and will be remembered for his warm smile and brilliance. He was also a loyal Kansas City Chiefs fan and stuck with them even through the tough times. Scott is survived by his Mother, Marilyn Ernst, of Waynesville; his Brother, Dave and Sherry Ernst, of Waynesville; two nephews, Karl Ernst and Dallas Ernst; two nieces, Kirsche “Kae” Miller and Lorelei Foe, and numerous other aunts, uncles and cousins. He is preceded in death by his father, Richard “Dick” Ernst and his Brother, Randy Ernst. The Ernst Family wishes to extend their gratitude to Scott’s co-workers at Rockwell Collins and the staff at St. Luke’s Hospital, who have shown graciousness and kindness during this difficult time. The family also requests that donations be made in Scott’s memory to the American Heart Association in Lieu of flowers.

Scott Richard Ernst, 55, of Cedar Rapids, died of a sudden-heart attack on Friday, April 20, 2018, while at work in Cedar Rapids, Iowa. A visitation will be held from 5-7 pm Tuesday, April 24, 2018 at Cedar Memorial Park Funeral Home with sharing... View Obituary & Service Information

The family of Scott Richard Ernst created this Life Tributes page to make it easy to share your memories.

Scott Richard Ernst, 55, of Cedar Rapids, died of a sudden-heart...