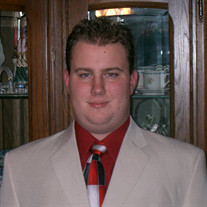 Scott Dennis Hutchinson, son of Dennis G. and Christine D. (Fedder) Hutchinson, was born April 22, 1988 in Concord, Massachusetts. He passed away Tuesday, June 21, 2016 in his home having attained the age of 28 years. Due to his father being in the United States Army, Scott and the family moved to Germany and at the age of 5, he and the family moved to Waynesville, Missouri where they continued to reside. He attended school in the Waynesville R-VI School District and graduated with the class of 2006. After graduating from high school, Scott attended and graduated from Linn Tech. He worked for a time at TK’s Pizza of St. Robert and after graduating from Linn Tech, he began working for Seeger Toyota in St. Robert. Scott enjoyed his job very much at Seeger and the staff there became like family to him. During his high school years, Scott was very involved with the youth group at Waynesville United Methodist Church. He was also a member of the Junior ROTC program at Waynesville High School and had attained Life Scout in the Boy Scouts. In his spare time, Scott enjoyed computer gaming, and repairing and building things. He loved being outside while fishing or you could find him at the shooting range target practicing with his pistol or rifle and he was a great marksman when it came to archery. Scott was an avid pool player and played on the local pool league. Most importantly, he loved spending time with his family, friends and his best buddy, Max, his dog. Scott will be sadly missed, but fondly remembered by all those that knew and loved him. He leaves to cherish his memory, his parents: Dennis and Christine Hutchinson of Waynesville, MO; one sister: Crystal Hutchinson of Waynesville, MO; maternal step-grandfather: Dennis Hemstreet of St. Robert, MO; several aunts, uncles, cousins, other relatives and friends. Scott was preceded in death by his maternal grandparents: Theodore and Evelyn Fedder and paternal grandparents: John and Beverly Hutchinson. Services were held at 7:00 p.m. Saturday, June 25, 2016 in the Waynesville United Methodist Church with Pastor Patrick Moore officiating. The songs “Paper Thin Hymn” by Anberlin, “With Hope” by Steven Curtis Chapman, “Amazing Grace, My Chains Are Gone” by Chris Tomlin, “I Can Only Imagine” by Mercy Me, “There Will Be A Day” by Jeremy Camp and “Porcelain Heart” by Barlow Girl were played. Memorial contributions may be made in memory of Scott Hutchinson and may be left at the funeral home.

Scott Dennis Hutchinson, son of Dennis G. and Christine D. (Fedder) Hutchinson, was born April 22, 1988 in Concord, Massachusetts. He passed away Tuesday, June 21, 2016 in his home having attained the age of 28 years. Due to his father... View Obituary & Service Information

The family of Scott Dennis Hutchinson created this Life Tributes page to make it easy to share your memories.