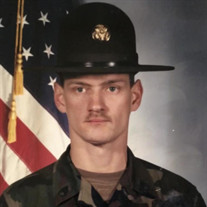 Scott Lee Welser, son of the late Roy B. and Eileen M. (Teel) Welser, was born July 14, 1954 in Bethlehem, Pennsylvania. As a young boy, Scott grew up in the Plainfield Township, Pennsylvania area and graduated from Pen Argyl High School. He was a member of the Hope United Church of Christ and was baptized. Scott volunteered as a fireman with the Plainfield Township Fire Department and it was extra special to volunteer with his dad which was also a fireman. Scott entered the United States Army and served his country faithfully until his retirement on December 31, 1993. During his time in the service, he did two tours in Germany, one tour in Korea and also served as a drill sergeant on Fort Leonard Wood for 3 years. He had attained the rank of Sergeant First Class and earned several awards and commendations; some of which include: Army Commendation Medal (1 Oak Leaf Cluster), Army Achievement Medal, Army Good Conduct Medal, National Defense Service Medal (1 Bronze Service Star), NCP Professional Development Ribbon (Advanced), Army Service Ribbon, Overseas Service Ribbon (3), and the Drill Sergeants Identification Badge. While serving in Germany, Scott met Mary Jane LeAnna, who was also serving in the military. They were united in marriage on July 21, 1978 in Phoenix, Arizona. They shared over 41 years of marriage together and two children: Timothy and Keri. After retiring from the military, Scott worked as a truck driver for 3-4 years and he was currently employed with the safety office with the 3rd Chemical Brigade on Fort Leonard Wood. In his spare time, Scott loved watching NASCAR and was especially an avid fan of Carl Edwards while he was still racing. Scott enjoyed getting together with his “coffee club” every Saturday and Sunday morning. Scott passed away Tuesday, June 23, 2020 in his home having attained the age of 65 years, 11 months and 9 days. He will be sadly missed, but fondly remembered by all those who knew and loved him. Scott leaves to cherish his memory his wife: Mary Welser of St. Robert, MO; one son: Timothy L. Welser and wife Evelyn of Dallas, TX; one daughter: Keri A. Smith and husband Sean of the State of Michigan; seven grandchildren: Alyssa, McKenzie, Tyler and Tanner Amaya and Cisco Tafoya, and Aidan and Hailey Smith; one sister: Claudia A. Hess of the State of Pennsylvania; two nephews: Ron Edelman, Jr. and Derrick Edelman, both of the State of Pennsylvania; other relatives and friends. Scott was preceded in death by his father: Roy B. Welser (1987); his mother: Eileen Welser (August 2016); and one brother: Byron Welser (April 2016). A memorial gathering was held Wednesday, July 1, 2020 in the Memorial Chapels and Crematory of Waynesville / St. Robert. Burial will be held in the Plainfield Cemetery of Pen Argyl, Pennsylvania at a later date. In lieu of flowers, memorial contributions may be made in memory of Scott Welser to the donor’s choice and may be left at the funeral home.

The family of SFC (Ret) Scott Lee Welser created this Life Tributes page to make it easy to share your memories.