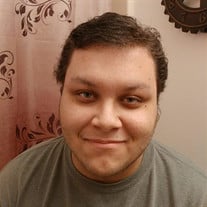 Seamus Robert Owens Reilly, son of James B. and Jacqueline L. (Jabori) Reilly, was born August 6, 1996 in San Antonio, Texas while his father was stationed at Lackland Air Force Base. In 1999, Seamus and the family moved to Eielson Air Force Base, Alaska and then in 2004 moved to Waynesville, Missouri where he graduated from Waynesville High School in 2014. After graduation, Seamus continued his education and was currently enrolled at Full-Sail University, working towards a Bachelor of Science Degree in Game Design. Seamus enjoyed gaming with friends online and he was very talented when it came to designing games. He also liked to go with his best friend, Alexander Willits, to the range and loved spending time with his nephew, Rome and his friends and family. Seamus was known, by all those that truly knew him, as the “Gentle Giant”. He loved and cared for his friends and family deeply. Seamus passed away Tuesday, June 6, 2017 having attained the age of 20 years and 10 months. He will be sadly missed, but fondly remembered, by all those that knew and loved him. He leaves to cherish his memory, his parents: James and Jackie Reilly of the home; one sister: Kayla Reilly of Springfield, Mo; grandparents: Robert and Bonnie Baker of Greentop, Mo; seven aunts: Cyndi Faubel of Spokane, WA, Jennifer (Chris) Shrum of Aurora, CO, Julia (Steve) Robinson of Aurora, CO, Mildred Owens of Denver, CO, Clara (Ronald) Owens of Denver, Co, Stephanie (Johnnie) Gillespie of Denver, CO, Kimberly (Dale) Butler of TN and Tracey (Dan) Ornelas of Denver, CO; two uncles: Jeff (Mika) Jabori of Tokyo, Japan and Wade Owens of Denver, CO; one nephew: Rome Johnson of Springfield, MO; several great aunts and uncles, cousins, other extended family and friends. Seamus was preceded in death by his grandmother: Terrie Jabori; grandfather: L.C. Owens; aunt: Krista L. Baker; two uncles: Harrison Owens and Willie “Fuzz” Owens; cousin: Harrison Owens, Jr.; great-grandparents: Louise “Bud” and Joanne E. Baker and Virginia and Dale Huffman. Services were held at 2:00 p.m. Sunday, June 11, 2017 in the Memorial Chapels and Crematory of Waynesville / St. Robert with Pastor Chris Hendrix officiating. The songs “Sound of Silence” by Disturbed, “A Sky Full of Stars” by Coldplay and “Leave Out All the Rest” by Linkin Park were played. Friends and family members recalled their wonderful memories of Seamus. Memorial contributions may be made in memory of Seamus Reilly and may be left at the funeral home.

Seamus Robert Owens Reilly, son of James B. and Jacqueline L. (Jabori) Reilly, was born August 6, 1996 in San Antonio, Texas while his father was stationed at Lackland Air Force Base. In 1999, Seamus and the family moved to Eielson Air... View Obituary & Service Information

The family of Seamus Robert Owens Reilly created this Life Tributes page to make it easy to share your memories.