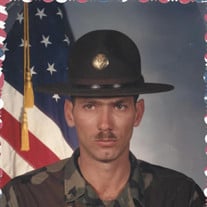 Ronald James Hake, son of the late Raymond T. Hake and Bernita (Wieberg) Hake, was born November 1, 1959 in Mexico, Missouri where he grew up and graduated from Mexico High School with the Class of 1978. Ron began working at an early age on the family farm where he developed a great work ethic. This work ethic served him well as he went on to work at AP Green before enlisting in the United States Army in 1980. His work ethic helped him tremendously while in the military. He had attained the rank of Sergeant First Class and earned several awards and commendations; some of which include: Meritorious Service Medal (3rd Award), Army Commendation Medal (4th Award), Army Achievement Medal (3rd Award), Good Conduct Medal (6th Award), National Defense Service Medal, NCO Professional Development Ribbon (w/num 3), Army Service Ribbon, Overseas Service Ribbon (w/num 2), and the Drill Sergeant Badge. In 1988, Ron became the 1st E-5 to receive the Drill Sergeant of the Year award. During his military career, he was stationed at various duty stations and at the time of his retirement in 2001, he was stationed in Germany. Ron met a young woman that was a friend to his twin sisters; her name was Debra Sue Huttsell. The story is told that they met after he tried to run over her with a farm truck, but however they met, they began dating and were united in marriage on June 1, 1980 at Fort Leonard Wood, Missouri. They shared over 33 years of marriage together and were blessed with two children: Justin and Christina before Debra preceded Ron in death on October 1, 2013. After retiring from the military, Ron and the family moved back to Fort Leonard Wood to be close to the military base with the hospital and health benefits. He continued to serve for a short time as a corrections officer for the Department of Corrections in Jefferson City, Missouri until he became disabled. On December 28, 2015, Ron was united in marriage to Mary Louise (d’Entremont) Hartshorn in St. Robert, Missouri. They shared many wonderful memories and seven years together. In his spare time, Ron enjoyed being outdoors hunting and fishing. He especially enjoyed waterfowl hunting with his family and loved to go on cruises. He was a member of the St. Robert VFW Post 3176, lifetime member of Harry Herron Disabled American Veterans Post, and Ducks Unlimited. Most importantly, Ron loved spending time with his family, especially his grandchildren. Ron passed away Tuesday, May 18, 2021, in his home in St. Robert, Missouri having attained the age of 61 years. He will be sadly missed, but fondly remembered by all those that knew and loved him. He leaves to cherish his memory, his wife, Mary of the home; two children, Justin Hake (Jessica) of Conway, AR, and Christina Hake of Waynesville, MO; two step-children, Robert Francis (Abbra) of Wichita, KS and James Francis (Rose) of Topeka, KS; five grandchildren, Cadynce “Sunshine” Hake, Braeson Hake, Garrett Hake, Layton Pack, and Meyers Francis; his siblings, Virginia Fennewald (Marty) of Ladonia, MO, Helen Hake of Seebee, TX, Kenny Hake (Billie) of Sedalia, MO, Mary Jordan (Danny) of Statesville, NC, Janet Jones (“Randell”)of Thompson, MO, Jeanet Minnick (Steve) of Santa Fe, MO, and Nancy Buchmeier (Chuck) of Curryville, MO; special “Mountain” friend, Larry Stokes of Crocker, MO; a number of nieces and nephews; as well as a host of other relatives and friends. In addition to his parents and first wife, Ron was preceded in death by one sister: Debbie Ann Hake. Even though he is gone from our sight, we will still hear in our hearts and minds the two phrases that he was most popular for: “How bout those ducks” and “Suck it up Buttercup”. Funeral Services were held at 1 p.m. Thursday, May 20, 2021, in Memorial Chapels and Crematory of Waynesville/St. Robert. Burial with Full Military Honors followed in Missouri Veterans Cemetery FLW in Waynesville, under the care and direction of Memorial Chapels and Crematory of Waynesville/St. Robert. Memorial Contributions in memory of Ronald Hake may be made to the American Cancer Society and may be left at the funeral home.

Ronald James Hake, son of the late Raymond T. Hake and Bernita (Wieberg) Hake, was born November 1, 1959 in Mexico, Missouri where he grew up and graduated from Mexico High School with the Class of 1978. Ron began working at an early age... View Obituary & Service Information

The family of SFC (Ret) Ronald James Hake created this Life Tributes page to make it easy to share your memories.