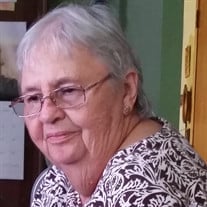 Sharon Kay Rippy, daughter of the late Walter Alan and Emma Lucinda (Scott) Hammock, was born May 20, 1945 in Richland, Missouri where she grew up and attended school. On September 17, 1960, Sharon was united in marriage to Chester Leroy Jeffries and they shared two children: Darla and Darrell. On July 7, 2000, Sharon was united in marriage to Oscar Frank Rippy in Miami, Oklahoma. They met through a mutual friend and enjoyed ten years together before Frank preceded her in death on July 10, 2010. Sharon was a hardworking woman. She worked as a clerk for the City of Richland, and also for K-Mart and Dollar General both of Lebanon. For most of her working years, she was able to stay at home and take care of her family. In her spare time, Sharon loved working outdoors in her flower gardens - planting and tending to her flowers. She enjoyed going to yard sales and thrift stores and finding a great bargain. Most importantly, she loved being “Gram” and spending time with her grandchildren and great grandchildren. As a young girl, Sharon made a profession of faith and was baptized. She went home to be with her Lord Friday, December 25, 2015 in her home in Lebanon, Missouri having attained the age of 70 years. She will be sadly missed, but fondly remembered by all those who knew and loved her. Sharon leaves to cherish her memory, two children, Darla Quesenberry (John) of Laquey, MO, and Darrell Jeffries of Richland, MO; two step-children, Craig Rippy (Becky) of St. James, MO, and Kim Brooks (Randy) of Springfield, MO; four grandchildren: Charlotta Wallander (Nathan) of Laquey, MO, Timmy Sufficool (Shayna) of Stoutland, MO, Tyler Sufficool (Tammy) of Laquey, MO and Marriah Jeffries of Bel Air, MD; eight step-grandchildren: Rena Lewis (Josh) of England, Kaleb Rippy (Chelsie) of St. James, MO, Danee Gray (Michael) of Moberly, MO, Trisha DeVries (Zach) of St. James, MO, Josh Rippy of St. James, MO, Stephanie Harris of Springfield, MO and Gunnar and Lyric Brooks of Springfield, MO; seven great-grandchildren: Curtis, Colton, and Courtney Wallander, Jimmie Jo, Libertie, and Emmet Sufficool and Jillian Wade; three step-great grandchildren: Nathaniel Wallander, Landon Lewis and Bentley Harris; sister-in-law: Hazel Hammock of Ash Grove, MO; a number of nieces and nephews; a close family friend and caregiver, Marlena Hewitt; as well as a host of other relatives and friends. In addition to her parents and second husband, Sharon was preceded in death by first husband: Chester "Leroy" Jeffries; two sisters: Nathalee Oursbourn, and Kathleen Bench; two brothers: Floyd and James Hammock; and two great-grandsons: Ashtyn and Landon Sufficool. Services were held at 2:00 p.m. Tuesday, December 29, 2015, in the First Free Will Baptist Church of Lebanon, Missouri with Pastor Andy Rains and Pastor Craig Rippy officiating. Recorded music selections included "In the Garden," "One Day At a Time," and "Just A Closer Walk With Thee." Serving as escorts were Doug Oursbourn, Dale Oursbourn, Dennis Oursbourn, Jimmy Bench, Larry Crossland and Frank Hill. Honorary escorts were Johnny Green, John York and David Williams. Burial followed in the Lebanon City Cemetery of Lebanon, Missouri. Services were under the direction of Memorial Chapel of Richland. A memorial has been established in memory of Mrs. Rippy and contributions can be left at the funeral home. Online condolences can be sent at www.memorialchapelsandcrematory.com

Sharon Kay Rippy, daughter of the late Walter Alan and Emma Lucinda (Scott) Hammock, was born May 20, 1945 in Richland, Missouri where she grew up and attended school. On September 17, 1960, Sharon was united in marriage to Chester Leroy Jeffries... View Obituary & Service Information

The family of Sharon Kay (Hammock) Rippy created this Life Tributes page to make it easy to share your memories.