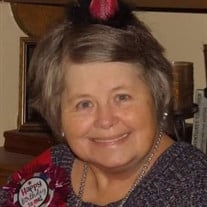 Sharon Delane Little, daughter of Winfred C. Rawls and Linda Jane (Evans) Rawls, was born January 9, 1956 in Monroe, Louisiana where she grew up and attended school. Most of her working years were spent as a claim’s worker for Commercial Union Loans in Ruston, Louisiana. In February of 1996, Sharon was united in marriage to Eldred Ray Little in Rayville, Louisiana. They shared 17 years of marriage together before he preceded her in death in 2013. Sharon was a very family-oriented and traditional Southern woman and took great pride in caring for her two daughters: Jamie and Carolina. She had the heart of a servant and took care of others before she did herself. Sharon used to collect unicorns and was always on the lookout for the best looking one. She and Ray usually had some sort of animal that they would care for, whether it was a cow, chickens, geese, peacocks, etc. Sharon passed away Saturday, May 8, 2021 in her home having attained the age of 65 years. She will be sadly missed but fondly remembered by all those that knew and loved her. She leaves to cherish her memory, her two daughters: Jamie Prewitt and her husband Chris of Waynesville, MO, and Carolina Little and her fiancé Blake Ulmer of Winnsboro, LA; three grandchildren: Harley, Terri Lynn, and Neal Prewitt, all of Waynesville, MO; mother: Linda Rawls of Lawrence, KS; two brothers: Steven “Kim” Tyler and his wife Glenda of West Monroe, LA, and Winfred “Jr” Rawls, Jr. of Calhoun, LA; two sisters: Denise Curtis and husband Kevin of Lawrence, KS, and Donna Gail Reeves of Baton Rouge, LA; several nieces, nephews, other relatives, and friends. In addition to her husband, Sharon was preceded in death by her father, Winfred “W.C.” Rawls. There are no services planned at this time and arrangements are under the direction of Memorial Chapels and Crematory of Waynesville / St. Robert.

Sharon Delane Little, daughter of Winfred C. Rawls and Linda Jane (Evans) Rawls, was born January 9, 1956 in Monroe, Louisiana where she grew up and attended school. Most of her working years were spent as a claim&#8217;s worker for Commercial... View Obituary & Service Information

The family of Sharon Delane Little created this Life Tributes page to make it easy to share your memories.