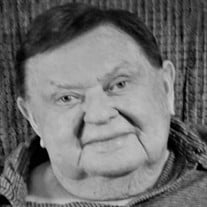 Shelby Gene Allen passed away peacefully on February 16, 2021, at Cox Hospital in Springfield, Missouri, after having struggled with pneumonia and other health-related issues. He is survived by his wife, Charlotte Allen of the home, and children Sylvia (Butchy) Newkirk and her husband Gene Newkirk, of St. Robert, MO; Barbara Shackleford-Thomas and her husband James L. Thomas, of Dixon, MO; Karen Espinoza and her significant other James Clark of Rolla, MO; Kenneth Allen and his significant other Patty Fellers, of St. Robert, MO; Sandy Johnson and her husband Kevin Johnson, of Lebanon, MO; Suzanne Allen (deceased), Tom Allen and his wife Haidemarie Allen, of St. Robert, MO; and numerous grandchildren and great-grandchildren. Shelby attained the age of 83 years. He was married to Charlotte Liebert in Germany on May 9, 1959, while serving in the U.S. Army. Upon marriage, Shelby and Charlotte traveled throughout the world for different duty assignments. Shelby also served in the Vietnam war and did hardship tours in Germany while serving his country patriotically until retiring from the U.S. Army after 20-years of service in 1977. Shelby and Charlotte then pursued a joint business venture and opened a car dealership called “Spur Auto Sales” and ran that business for many years until retiring last year. Shelby’s interests include bird watching, sitting on the front porch and enjoying nature, eating good food, talking about cars, and visiting with his family and friends. He was particularly fond of his dog named Sasha, whom he called “doggie.” Shelby would share his dinner with “doggie” every evening and they would sleep in the same bed together. Sasha was his constant companion. Shelby also enjoyed seeing and visiting with his children and grandchildren. He would give each grandchild a special name and deliberately mispronounce their names to get them going. This always made him laugh. Shelby loved to fish in his younger years and would often take the family to the Lake of the Ozarks for picnics and fishing. He also enjoyed restoring old cars. Many times, Shelby could be found underneath a vehicle after dark and working on it late into the evening with just a light hanging underneath the car. Shelby enjoyed life to the fullest and always made time to stop and talk. Shelby and Charlotte often traveled to Branson, Missouri, for the weekend where they owned property on Lake Taney Como. They enjoyed going to the music theatres, going out for dinner, enjoying the company of their friends and family, and, in particular, Loretta Lynn, whom Shelby often drove around Branson and visited with. Both Shelby and Loretta were raised in Kentucky not far from each other and enjoyed talking about their life in Kentucky. Shelby lived a long happy life and was grateful for having as he said, “good kids.” Shelby will be fondly remembered by family and friends as someone you could always talk to, a loving father and grandfather, and a proud patriot and U.S. Army veteran. Services were held at 1:30 p.m. Tuesday, February 23, 2021 in the Memorial Chapels and Crematory of Waynesville / St. Robert with Richard Baptiste officiating. The songs “Amazing Grace” by Vince Gill & Carrie Underwood, “Go Rest High on that Mountain” by Vince Gill, “When I Get Where I’m Going” by Brad Paisley, “Ave Maria” by Il Devo, and “My Way” by Frank Sinatra were played. Burial with military honors followed in the Waynesville Memorial Park Cemetery of Waynesville. Military honors were provided by Missouri Honors Team.

Shelby Gene Allen passed away peacefully on February 16, 2021, at Cox Hospital in Springfield, Missouri, after having struggled with pneumonia and other health-related issues. He is survived by his wife, Charlotte Allen of the home, and children... View Obituary & Service Information

The family of SFC (Ret) Shelby Gene Allen created this Life Tributes page to make it easy to share your memories.