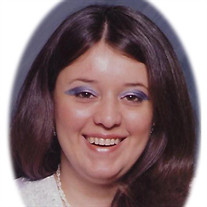 SSherry Lynn Laverdiere, daughter of the late Stan and Ruth Claira (Manor) Cojanu, was born August 16, 1955 in Warren, Michigan where she grew up and graduated from Fitzgerald High School. On April 21, 1973, Sherry was united in marriage to Michael Kerry Laverdiere in Warren, Michigan. They shared over 46 years of marriage together and were blessed with two children: Robert and Heather. Sherry was a hardworking woman and took great pride in helping to provide for her family. She worked as a Recorder Clerk, Electronic Sales Clerk and Softlines Clerk and her greatest pride came from being a housewife and mother. In her spare time, Sherry enjoyed cooking for her family and friends. She also liked to do puzzles, paint and color. Most importantly, she loved spending time with her family and friends, especially her granddaughter: Havanna. Sherry passed away Tuesday, June 4, 2019 in the Lake Regional Hospital of Osage Beach, Missouri having attained the age of 63 years. She will be sadly missed, but fondly remembered by all those who knew and loved her. Sherry leaves to cherish her memory, her husband: Michael Laverdiere of the home; one granddaughter: Havanna Bobbitt of the state of Ohio; one sister: Rhonda Stocum (Jeff) of Plato, MO; several nieces, nephews, other relatives and friends. In addition to her parents, Sherry was preceded in death by her son, Robert (2016) and her daughter, Heather (2018). Graveside services were held at 1:00 p.m. Friday, June 7, 2019 in the Missouri Veterans Cemetery of Waynesville with Pastor Richard Breeden officiating. Serving as escorts were family and friends. Services were under the direction of Memorial Chapels and Crematory of Waynesville / St. Robert. Memorial contributions may be made in memory of Sherry Laverdiere and may be left at the funeral home.

SSherry Lynn Laverdiere, daughter of the late Stan and Ruth Claira (Manor) Cojanu, was born August 16, 1955 in Warren, Michigan where she grew up and graduated from Fitzgerald High School. On April 21, 1973, Sherry was united in marriage... View Obituary & Service Information

The family of Sherry Lynn Laverdiere created this Life Tributes page to make it easy to share your memories.