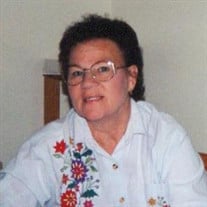 Shirley Fay Greer, daughter of the late George Yancie and Priscilla Fern (Dial) Keeney, was born October 5, 1942 in Licking, Missouri. Shirley was united in marriage to Thomas Vogt and they were blessed with seven children: Dorothy, Brenda, Georgia, Jimmie, Debra, Lester, and Richard. Thomas preceded her in death. Shirley was a homemaker, raising her seven children who all graduated from Waynesville High School. She loved spending time with family and friends, especially her grandchildren. Shirley enjoyed being outdoors. You could find her either out working in her garden, watching birds or going to the river to fish. She also loved caring for her dogs. Shirley was united in marriage to Harold Greer in 1983 and they shared over 19 years together before he preceded her in death in 2003. Shirley made a profession of faith and was baptized on September 14, 1997 at Community Baptist Church in Lebanon, Missouri. She had recently been attending New Life Christian Church of St. Robert until her health began to fail. Shirley went home to be with her Lord Thursday evening, December 4, 2014, in her home, surrounded by all her children. She had attained the age of 72 years. Shirley leaves to cherish her memory, her seven children, Dorothy and Tom Cable of Crocker, MO, Brenda and Greg Ihrke of Prince George, VA, Georgia and Jim Minor of Waynesville, MO, Jimmie and Lisa Vogt of Waynesville, MO, Debra and Richard Doyle of Rolla, MO, Lester and Connie Vogt of Waynesville, MO, Richard Vogt of Waynesville, MO; two brothers, Robert Keeney (Antoninette) of St. Paul, MN, and Ray Keeney (Susie) of St. Robert, MO; two sisters, Ella Campbell of Lebanon, MO and Georgia Davis of Richland, MO; a host of grandchildren and great-grandchildren; several nieces and nephews and friends. In addition to her parents and husbands, Shirley was preceded in death by one grandson, Col. Thomas Cable, Jr.

Shirley Fay Greer, daughter of the late George Yancie and Priscilla Fern (Dial) Keeney, was born October 5, 1942 in Licking, Missouri. Shirley was united in marriage to Thomas Vogt and they were blessed with seven children: Dorothy,... View Obituary & Service Information

The family of Shirley Fay Greer created this Life Tributes page to make it easy to share your memories.