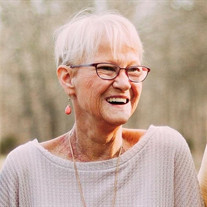 Shirley Joe Bolton, daughter of Robert Darrel Starmer and Elizabeth Pauline Starmer, was born March 20, 1956 in Waynesville, Mo. Shirley was the second to youngest daughter of 4 sisters- Linda, Mary, and Donna. When talking about growing up, Shirley often referenced the book “Little Women”. Shirley would say the Starmer sisters resembled the ‘March sisters’ and she was proud of that. Shirley graduated Richland High school in 1974. Shirley spent her early adult life as what she would call “an army wife”. During this time Shirley gained a daughter, Kelli, and gave birth to a daughter, Donna Lynn. Although Shirley enjoyed the “army wife life” and moving from state to state, she knew Richland would always be home, and later returned. Shirley spent most of her occupational life as a waitress. Not because of the money, but because she loved serving people. Shirley had a heart for people, and truly cared about every person she came in contact with. She did not have “customers”, she had friends. When Shirley would ask someone how their day was going, she meant it. Her coworkers were like family. Shirley served people in many ways. During Christmas Shirley would spend days baking cookies to give out to family and friends. Not only did she like baking them, but she also liked telling people how good they were! Shirley loved watching the food network, reading about new recipes, and even making her own. Shirley was known for winning many blue ribbons for her cooking creations. Shirley also loved dancing…to nearly everything she heard! She had the same ‘dance move’ for every song, and didn’t mind showing it off to anyone, anywhere! Shirley was also known to be a “goof ball”. She loved making people smile, or in some cases embarrassing loved ones (especially her nieces and nephews) to get a laugh! Shirley’s favorite way to spend time was with family. She loves shopping with her sisters and camping with family. In Shirley’s later years she had two big loves. Her companion, Randy and her granddaughter, Elliott. Although Shirley and Randy didn’t meet until later in life, it was as if they had been together forever. Shirley loved going “gravel roading” and learning new things from Randy. She picked up golfing, gardening, and even a love for wrestling! Shirley had another love. Her granddaughter Elliott. Anywhere Shirley went she would bring out pictures of her granddaughter, bragging how they looked alike. She loved making Elliott laugh and their McDonalds dates, but loved her “wet” kisses most off all. There is no doubt that Shirley left an impression on everyone she came across. She touched many lives and will be missed by many. Shirley leaves to cherish her memory two daughters, Donna Lynn Allen (Jake) of Grove, OK and Kelli Smith (Jon) of Orlando, FL; three grandchildren, Elliott Allen of Grove, OK, Brody and Brielle Smith both of Orlando, FL; longtime companion, Randy Lewis of Richland, MO; her father Robert Starmer of Richland, MO; three sisters, Linda Woody (Jay Powers) of Richland, MO, Mary Reese (Don) of Highlandville, MO and Donna Sackett (Craig) of Richland, MO; several nieces, nephews, and a host of other relatives and friends. Services were held at 1:00 p.m., Friday, September 27, 2019 in the First Christian Church of Richland with Pastor Mark Kupier officiating. Favorite music selections included, “Jesus I My Cross has Taken,” “Ten Thousand Reason” and “All Must Be Well” were played. Serving as escorts were Don Reese, Craig Sackett, Jay Powers, Don Bohannon, Randy Lewis, II and Matt Schnabel. Honorary escorts were Jake Allen and Jon Smith. Burial followed in the Oaklawn Cemetery of Richland. Services were under the care and direction of Memorial Chapel of Richland. In lieu of flowers, memorials have been suggested to Shirley’s daughter, Donna Lynn Allen. Memorials may be left at the funeral home. Online condolences can be sent at www.memorialchapelsandcrematory.com

Shirley Joe Bolton, daughter of Robert Darrel Starmer and Elizabeth Pauline Starmer, was born March 20, 1956 in Waynesville, Mo. Shirley was the second to youngest daughter of 4 sisters- Linda, Mary, and Donna. When talking about growing up,... View Obituary & Service Information

The family of Shirley Joe Starmer-Bolton created this Life Tributes page to make it easy to share your memories.