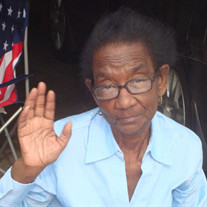 Shirley Ann Williams, daughter of the late Eddie Jackson and Ruby Lee Roper, was born September 7, 1952 in Merigold, Mississippi. As a young girl at the age of 13, Shirley confessed Christ as her Savior in Shelby, Mississippi at Union Hill Missionary Baptist Church. In 1968, Shirley moved to Chicago with her family, where she finished her education at Malcolm X Learning Center. After moving to Chicago, Shirley joined the New Promise Land Ministry where she served as usher for many years. On July 3, 1991, Shirley was united in marriage to Isadore Williams in Mound Bayou, Mississippi. Shirley loved her family dearly and took pride in being able to stay at home and raise her children: Otis, Kenya and Kristner. In her spare time, she enjoyed playing Scrabble, Gin Rummy and Pet Rescue. She was also an avid baseball fan of both the St. Louis Cardinals and the Chicago Cubs. Most importantly, she loved spending time with her family, especially the grandchildren. Shirley passed away Wednesday, June 5, 2019 in the University of Missouri Hospital and Clinics of Columbia, Missouri having attained the age of 66 years. She will be sadly missed, but fondly remembered by all those who knew and loved her. Shirley leaves to cherish her memory, her husband: Isadore Williams of Chicago, IL; three children: Otis Roper and his wife Nicole of Grand Prairie, TX, Kenya Roper-Goza and her husband Anthony of St. Robert, MO and Kristner Franklin and her husband Marquis of St. Robert, MO; nine grandchildren: Tyler, Aqura, Marcques, Kaleia, Nina, Kristopher, Kyran, AJ, and Taj; one sister: Shirley Jean Roper and her husband M.C. of Joliet, IL; one brother: John Roper and his wife Jackie of Chicago, IL; several nieces, nephews, cousins, other relatives and friends. In addition to her parents, Shirley was preceded in death by one brother: Wankey; and three sisters: Faye, Lavolia, and Fanny. Graveside services were held at 3:00 p.m. Thursday, June 13, 2019 in the Waynesville Memorial Park Cemetery of Waynesville under the direction of Memorial Chapels and Crematory of Waynesville / St. Robert. Memorial contributions may be made in memory of Shirley Williams and may be left at Memorial Chapels and Crematory of Waynesville / St. Robert.

Shirley Ann Williams, daughter of the late Eddie Jackson and Ruby Lee Roper, was born September 7, 1952 in Merigold, Mississippi. As a young girl at the age of 13, Shirley confessed Christ as her Savior in Shelby, Mississippi at Union... View Obituary & Service Information

The family of Shirley Ann Williams created this Life Tributes page to make it easy to share your memories.

Shirley Ann Williams, daughter of the late Eddie Jackson and...