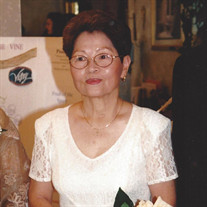 Son Mae Choe Schlie was born on December 29th of 1939, the daughter of Nyom Chu Choe and U Yon Chon in Pang Ne-ri, Republic of Korea. She spent her formulative years with her parents in Korea and Japan and with her grandparents. She was a witness to the horror of both the war with Japan and North Korea. In June of 1968 she met her husband, Alan Schlie, in Yunpung-Ri, Korea, a soldier stationed with the 2nd US Infantry Division. They were married on June 23rd of 1969 and remained together for over fifty years. Son loved fishing in the many lakes and streams in Missouri and Colorado. She traveled to many states and countries with family and friends. She enjoyed making her own clothes, gardening, flower arranging, and talking with friends. She took pride in her home, her husband, and in her own achievements. She spent hours in fellowship with Jesus through prayer, Bible study and visitation. Son accepted the Lord, Jesus Christ as Savior in 1974 and was again baptized in December of 2013 reaffirming her faith and proclaiming Jesus as her Lord and Savior. She was active in both the Korean Love of Christ Church in Saint Robert and Victory Fellowship Church in Waynesville, Missouri. She participated in mission trips to Montana, Mexico and Belize. Jesus welcomed Son into His Kingdom following a long battle with pain and cancer on September 2, 2019. Her infectious smile and encouraging comments will be remembered in our own times of trial and pain. Son is survived by her loving husband: Alan Schlie of St. Robert, MO; two nephews: Song Su Choe and Sang Ho Choe; and two nieces: Ok Yoe Snyder and Ok Cha TeSelle, all of the Northern Virginia area; along with several friends. God must truly love me to have moved me halfway around the world to provide me with such a wonderful “helpmeet” and then allow me to spend fifty-one years sharing life and love with her. I use the Biblical term “helpmeet” because she truly was a daughter of the Living God and His special treasure given to me. Services were held at 12:00 p.m. Friday, September 6, 2019 in the Victory Fellowship Church of Waynesville with Pastor Frank Brunais and Pastor Curtis Felton officiating. Music was provided by the congregation and serving as escorts were family and friends. Burial followed in the Missouri Veterans Cemetery of Waynesville. Services were under the direction of Memorial Chapels and Crematory of Waynesville / St. Robert. Memorial contributions may be made in memory of Son Mae Choe Schlie to the Church of God World Missions and may be left at the funeral home or at the church.

Son Mae Choe Schlie was born on December 29th of 1939, the daughter of Nyom Chu Choe and U Yon Chon in Pang Ne-ri, Republic of Korea. She spent her formulative years with her parents in Korea and Japan and with her grandparents. She was a... View Obituary & Service Information

The family of Son Mae Choe Schlie created this Life Tributes page to make it easy to share your memories.