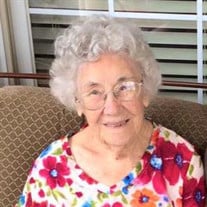 Sophia Elizabeth Bartlett, daughter of the late Carl Oscar and Lucy Emaline (Manes) Anderson, was born February 23, 1917 in Swedeborg, Missouri. She grew up in Waynesville and graduated from high school with the Class of 1935. After graduating from high school, Sophia began her working career. She worked as a clerk at Dodds Dry Goods, Keltners Clothing Store, Heads Department Store and retired from Laclede Electric Coop. Sophia met Walter Clifton Bartlett, Jr. while she was on a date with another individual and he was also on a date with another individual. Shortly after their meeting, they began dating and were united in marriage on June 15, 1940 in Waynesville, Missouri. They shared over 47 years and three children together before he preceded her in death in 1987. She had made a profession of faith earlier in her life and Sophia was a charter member of the First Christian Church of Waynesville. She was faithful to be there every time the doors were open and for many years she played the piano for the congregation. She was also very involved in the Mary Martha Circle at church and enjoyed helping wherever she was needed. Sophia was also a member of the Homemakers Club. In her spare time, she enjoyed knitting and sewing. She was also very talented with crocheting and made several items for different people in her family and her church family. Most importantly, she loved spending time with her family and treasured every time she could spend with them. Sophia went home to be with her Lord the afternoon of October 1, 2019 in the North Park Village Senior Living of Ozark, Missouri having attained the age of 102 years. She will be sadly missed, but fondly remembered by all those that knew and loved her. Sophia leaves to cherish her memory her son: Carl Bartlett (Kay) of Springfield, MO; her daughter: Kathleen Cantrell (Robert) of Blue Eye, MO; her sister: Irene Spencer of Waynesville, MO; her daughter-in-law: Cheryl Bartlett of Waynesville, MO; eight grandchildren: David Cantrell (Karen), Cheri Dade (Dave), and Karla Bartlett all of Springfield, MO, Sandy Gough (Randy) of Olathe, KS, Kirsten Shaw (Luke) of Warrensburg, MO, Chris Childs and Sara Gee both of Waynesville, MO, and Dylan Neuman; 14 great-grandchildren; several nieces, nephews, other relatives and friends. In addition to her parents and husband, Sophia was preceded in death by her son: Timothy Lee Bartlett; three brothers: Herman Anderson, Melvin Anderson and Vernon Anderson (who died as an infant); and two sisters: Victoria Brown and Esther Tinsley. Services were held at 2:00 p.m. Friday, October 4, 2019 in the Memorial Chapels and Crematory of Waynesville / St. Robert with Bill Walton officiating. The songs “The Last Mile of the Way” and “Celebrate Me Home” were sung by Becky Lercher. Serving as escorts were Sophia’s great grandsons: Taylor Dade, Brock Cantrell, Ryan Gough, Jordan Dade, Chase Cantrell, Logan Shaw, Griffin Shaw, Rylee Gee and Ethan Childs. Burial followed in the Crocker Memorial Park Cemetery of Crocker, Missouri and those in attendance sang “Victory in Jesus” written by E.M. Bartlett. Memorial contributions may be made in memory of Sophia Bartlett to the First Christian Church of Waynesville, MO, and may be left at the funeral home.

Sophia Elizabeth Bartlett, daughter of the late Carl Oscar and Lucy Emaline (Manes) Anderson, was born February 23, 1917 in Swedeborg, Missouri. She grew up in Waynesville and graduated from high school with the Class of 1935. After... View Obituary & Service Information

The family of Sophia Elizabeth Bartlett created this Life Tributes page to make it easy to share your memories.

Sophia Elizabeth Bartlett, daughter of the late Carl Oscar and...