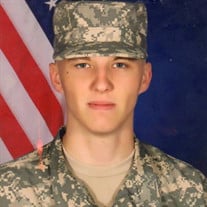 SPC Thomas Issiah Johnston, beloved son of Tony John and Melissa Dawn (Sander) Johnston was born October, 11, 1994 in Osage Beach, Missouri. Thomas grew up near Stoutland, Missouri where he attended school and was a member of the FFA and cross country team. Thomas graduated from Stoutland High School in 2014. After graduation Thomas entered into the United States Army completing his basic training at Fort Leonard Wood, Missouri. He was assigned in 2015 to serve over in South Korea for 2 years and was then assigned to Fort Drum in New York. While proudly serving in the Army Thomas became a Chemical Radiological, Biological and Nuclear Specialist and was currently serving in the National Guard in Springfield, Missouri. While in the Army, he received the Army Commendation Medal, Army Achievement Medal, Army Good Conduct Medal, Korean Defense Service Medal, Overseas Service Ribbon and Marksmanship Badge with Rifle Bar. Thomas greatly enjoyed the outdoors whether fishing, working on his truck, riding anything with a motor, “especially motors he and Tyler built,” he also liked playing video games, reading books, music and hanging out with his family and friends. Thomas passed away at his home on the morning of Saturday, January 12, 2019, having attained the age of 24 years. Thomas leaves behind to cherish his memory his loving parents: Tony & Missy Johnston, Stoutland, MO, 3 brothers, Tucker, Colby Johnston, and Levi Johnston (Katelyn) all of Stoutland, MO; his paternal grandparents: John & Betty Johnston of Stoutland, MO and maternal grandparents, Ray and Doris Fishback of Richland, MO; special niece, Maci Johnston of Stoutland, MO; several aunts, uncles, cousins, and a host of other relatives and friends. Thomas was preceded in death by his great grandparent parents, aunts and uncles. Thomas is safely home and at peace however, he will always live on in the hearts of those who knew and loved him. A celebration of life service was held at 12:00 Noon, Thursday, January 17, 2019 in the Memorial Chapel of Richland with Bro. Mike Luttrell officiating. Special music selections included “Simple Man,” “Won’t Back Down,” and “Amazing Grace.” Serving as escorts were Mike Leazott, Aaron Tiller, Ryan Johnston, Ben Kramer, Tyler Stradt, Levi Johnston and Colby Johnston. Honorary escorts were Luke Leazott, Dylan Hodges and Christian Zeigenbein. Burial followed in the Hillhouse Cemetery near Stoutland, Missouri. Services were under the care and direction of Memorial Chapel of Richland. In lieu of flowers, memorial contributions may be made in memory of Thomas Johnston and may be left at the funeral home. Online condolences can be sent at www.memorialchapelsandcrematory.com.

SPC Thomas Issiah Johnston, beloved son of Tony John and Melissa Dawn (Sander) Johnston was born October, 11, 1994 in Osage Beach, Missouri. Thomas grew up near Stoutland, Missouri where he attended school and was a member of the FFA and cross... View Obituary & Service Information

The family of SPC Thomas Issiah Johnston created this Life Tributes page to make it easy to share your memories.