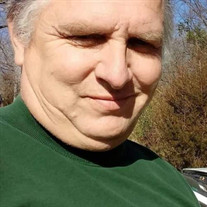 Michael James Moore, son of James Wesley Moore, Sr., and Mary Roanna (Rumfelt) Moore was born April 27, 1965, in Cabool, Missouri, and passed away on Thursday, February 17, 2022, while in the Harry S. Truman Veterans Hospital of Columbia, Missouri, having attained the age of fifty-six. His family moved to the Swedeborg area where Michael grew up attending school before later attending Richland, where he graduated with the RHS Class of 84. Michael joined the United States Army in 1986, serving his basic training at Fort Leonard Wood, Missouri before being transferred to North Carolina for his AIT training, and on to Georgia. During his career Michael was deployed to Saudi Arabia where he fought in the Desert Storm/Desert Shield War. In 1994, He finished his full-time service with the Army at Ft. Leonard Wood, before entering the National Guard Unit retiring as an SSG. Michael loved his country and was proud of his twenty-one years of faithful service. Michael married May Joy Labadie while stationed in North Carolina. They later welcomed a baby girl, Aurora into the world. The couple then transferred to Missouri where two more children, Michaela, and Gabriel were born. After he retired from the Army Reserves, Michael also worked at Lebanon’s Copeland/Emerson plant for 15 years, and for Wendy’s, and Hutson Motors in Rolla, Missouri. He loved being outdoors and living in the country. In Michael’s younger years he especially liked camping and hiking; later he enjoyed watching birds, farm animals, and his Green cheek conure, Cockatiels, and parakeets. He highly enjoyed playing games on his phone however, most of all Michael loved his family. If given a choice, Michael would rather spend a day with a grandchild over anything else he could do; each one held a special place in his heart. He was preceded in death by his brother, Feron Moore, his grandmother Catharan Moore, and his grandmother LaVern Rumfelt. Michael leaves behind to cherish his memory 3 children: Aurora Bailey (Eric) of Cadet, MO, Michaela Moore (DJ) of Republic, MO, and Gabriel Moore (Mariah) of St. Elizabeth, MO; 9 grandchildren: Autumn, Michael, Eric, Jr., Alyss, Brittany, Lorissa, Hunter, Beau, and Paisley; his parents: James Wesley Moore, Sr. of Star City, AR, and Mary Roanna (Rumfelt) Moore of Marshfield, MO; 2 brothers: Edward Moore (Rebecca) of Star City, AR, and James Moore, Jr. of Richland, MO; 3 sisters: Molly Moore of Star City, AR, Elizabeth Moore of St. Robert, MO, and Kathleen Wildt (Brian) of Bryant, AR; several nieces, nephews, and other relatives and friends. Michael was a kind and wonderful son, brother, uncle, father, grandfather, and dear friend to all. He appreciated the closeness of the small community and was greatly loved by those who knew and loved him. Services were held at 12:30 p.m., Monday, February 28, 2022, in the Memorial Chapel of Richland with Pastor John Dinwiddie officiating. Favorite music recordings included “Love Me the Way” by Lauren Duski, “Dancing in the Sky” by Dani and Lizzy, and “I’ll Fly Away” by Alan Jackson. Serving as escorts included Gabriel Bailey, Eric Bailey, D.J. Craig, Austin Moore, James Moore, Jr., and Edward Moore. Honorary escorts were John Relyea, Ryan Moore, Nichols Moore, Ethan Wildt, David Whipple, and Daniel Whipple. Burial with military honors followed at 2:00 p.m., in the Missouri Veterans Cemetery of Waynesville, Missouri. Military honors were provided by the Missouri Honors Team. Services were under the care and direction of Memorial Chapel of Richland. In lieu of flowers, memorials may be given in memory of Michael James Moore and may be left at the funeral home. Online condolences may be left at www.memorialchapelsandcrematory.com

The family of SSG (Ret.) Michael James Moore created this Life Tributes page to make it easy to share your memories.