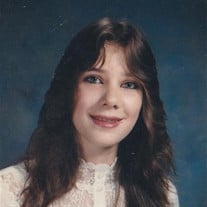 Stephanie Sue Sprenger, daughter of Robert Karl and Donna Sue (Terrell ) Cyr, was born June 10, 1972 in Neosho, Missouri. She later moved to Tucson, Arizona where she attended school. She later moved to the Springfield, Missouri area and stayed in Southwest Missouri until the last couple of years when she came to the Pulaski County area. Stephanie worked for Wal-Mart for several years, as well as working as a waitress in various restaurants. She loved to visit with people and her family was very important to her. In her spare time, Stephanie was a great decorator and collected knick knacks. Her greatest joy was being able to put a smile on someone’s face with a story or just loving them. She lived in the moment and enjoyed life immensely. Stephanie passed away Saturday, April 30, 2016, in an automobile accident near Laquey, Missouri having attained the age of 43 years, 10 months and 20 days. She will be sadly missed by all those that knew and loved her. Stephanie leaves to cherish her memory, four children, David Tanner of the state of Colorado, Brandon Daniel of Springfield, MO, Camron Black of Lebanon, MO and Miley Sprenger of Waynesville, MO; her parents, Robert and Donna Cyr of Long Lane, MO; four sisters, Teri Langwell, Kimber Tolbert, and Tina Clark, all of the state of Texas, and Niccole Cyr of Bolivar, MO; two brothers, James Cyr of Bolivar and J.T. Clark of the state of Florida; a number of nieces and nephews; as well as a host of other relatives and friends. Stephanie was preceded in death by her maternal and paternal grandparents. Graveside services were held at 1:00 p.m. Friday, May 6, 2016 in the Wade chapel Cemetery near Republic, Missouri with Rev. Chris Hendrix officiating. The songs “If I Die Young” by The Band Perry and “Lips of an Angel” by Hinder were played. Serving as escorts were family and friends. Services were under the direction of Memorial Chapels and Crematory of Waynesville / St. Robert. Memorial contributions may be made in memory of Stephanie Sprenger and may be left at the funeral home. Memorial Contribution can be made in memory of Stephanie Sprenger, and contributions may be left at the funeral home.

The family of Stephanie Sue Sprenger created this Life Tributes page to make it easy to share your memories.