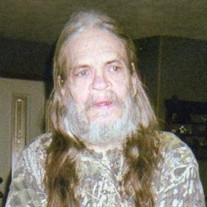 Stephen Mullins, son of Rodolph and Ella Nora (Vanover) Mullins, was born February 17, 1954 in McRoberts, Kentucky. However, his family moved into the small community of Richland, Missouri in 1959 from Germany, due to his father’s military service. Stephen grew up and attended school in Richland, graduating from Richland High School in 1972. Stephen married soon after graduating. He traveled a lot through the years and spent several years in South Carolina before moving back home to Richland in 2003. He worked for many years at Galva-Foam Industries in Camdenton, Missouri where he became supervisor before retiring. He gave of his time serving as a Scout Leader in Stoutland, Missouri. He greatly enjoyed being outdoors, spending time with his beloved pets and gardening. Stephen was very artistic and loved painting, woodcarving and putting together model cars. However, he treasured most times spent with his family and friends. Stephen passed away at the age of 63 years, 1 month and 12 days, on Saturday, April 1, 2017, in the Richland Care Center of Richland, Missouri. Stephen was preceded in death by his parents. He is survived by his son, Ryan Swatzel (Wanida) of Mountain Home, ID; 3 grandsons: Robert Steckelberg, Aki Uchima and Andrew Swatzel all of Mountain Home, ID; his brothers and sisters: Wilma Place (Ron) of Buffalo, MO, Curtis Mullins (Cheryl) of Greenville, SC, Rex Mullins (Patti) of Miami, OK, Lucretia Lynn Upton (Steve) of St. Robert, MO, Barry Mullins (Mary) of Richland, MO and Donna Howlett (Danny) of Richland, MO; a number of nieces and nephews; as well as a host of other relatives and friends. Stephen will be sadly missed by all those who knew and loved him, but his memory will remain in their hearts forever. Services were held at 2:00 p.m., Tuesday, April 4, 2017 in the Memorial Chapel of Richland Missouri with Pastor Christopher Hendrix, Sr. officiating. The songs “Holding Back the Years” and “Amazing Grace” were played. Serving as escorts were family and friends. Burial followed in the Mt. View Cemetery near Richland. Services were under the Memorial Chapel of Richland. Memorial contributions can be made in memory of Stephen Mullins, and contributions can be left at the funeral home.

Stephen Mullins, son of Rodolph and Ella Nora (Vanover) Mullins, was born February 17, 1954 in McRoberts, Kentucky. However, his family moved into the small community of Richland, Missouri in 1959 from Germany, due to his father&#8217;s military... View Obituary & Service Information

The family of Stephen Mullins created this Life Tributes page to make it easy to share your memories.