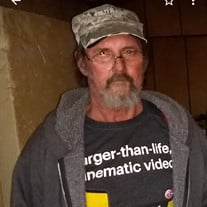 Steven Eugene Davis, son of Ulysses Eugene Davis and Helen Louise (Hough) Davis, was born September 1, 1956 in Rolla, Missouri. He passed away Monday, September 21, 2020 in the Mercy Hospital of Springfield, Missouri having attained the age of 64 years. Steve grew up in Waynesville and graduated from Waynesville High School with the Class of 1974. Upon his graduation, Steve enlisted in the United States Marine Corp and served his country faithfully until his honorable discharge. For most of his working years, Steve worked in construction and his expertise was in roofing. He also worked for Villa Mobile Homes setting up mobile homes for customers. In his spare time, Steve enjoyed fishing and being outdoors. He was an avid St. Louis Cardinal Baseball fan and he loved going to games, listening to games on the radio or watching them on TV. He started his love of baseball at an early age and would go to games with his grandfather, father, and brother in the early 1960s. Most importantly, he loved his three children: Ashley, Jesse, and Justin and especially enjoyed spending time with his grandchildren. He will be sadly missed, but fondly remembered by all those that knew and loved him. He leaves to cherish his memory, his three children: Ashley Thornton (Michiel) of Killeen, TX, Jesse Davis (Brianna) of Killeen, TX and Justin Davis (Kaitlyn) of Elgin, OK; seven grandchildren: Hope Thornton, Michiel Thornton III, Clarence Thornton, Averianna Davis, Zayden Ray Davis, Kaidence Davis and Kastin Davis; two siblings: Max Davis of Waynesville, MO and Deann Blevins (Gary) of Berryville, AR; stepmother: Nancy Davis of Potosi, MO; Liana Leggett of Arnold, MO, David Leggett (Nanette) of Sun City, FL and Tomas Leggett (Jan) of Dixon, IL; several nieces, nephews, other relatives and friends. Steve was preceded in death by his father: Ulysses Eugene Davis; and his mother: Helen Louise Smith. A memorial gathering was held from 3:00 – 5:00 p.m. Friday, September 24, 2020 in the Memorial Chapels and Crematory of Waynesville / St. Robert. Memorial contributions may be made in memory of Steven Davis and may be left at Memorial Chapels and Crematory of Waynesville / St. Robert.

The family of Steven Eugene Davis created this Life Tributes page to make it easy to share your memories.