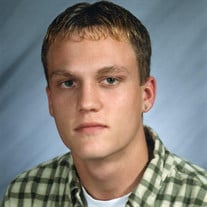 Steven Kenneth York was born February 24, 1982 in Columbia, Missouri. He passed away Tuesday, July 9, 2019 in his home in Richland, Missouri having attained the age of 37. Steven grew up in Richland where he attended school and graduated from Richland High School with the Class of 2000. He furthered his education at Drury University where he earned his Bachelor’s Degree. At the young age of 11, Steven was diagnosed with epilepsy. He always wanted to work, but due to the nature of his epilepsy, he was never able to. Steven’s passion as a young boy and even into adulthood was hunting and collecting hunting rifles. He killed his first deer at the age of 10 on his Grandpa York’s farm in Richland. He loved being outdoors. At an early age, Steven made an important decision in his life and asked Jesus to come into his heart. He was not a member of a particular church, but he always remembered that important decision he made. Steven will be sadly missed and forever remembered by all those who knew and loved him. He leaves to cherish his memory his two daughters, Hayley York and Gracey York both of St. Robert, MO; his Adoptive Parents, Kenneth and Kathy Wild of Richland, MO; his birth parents, Sheila Needs (and stepfather Harold) of Richland, MO, and Larry York, of Richland, MO; the mother of his children, Jennifer Robinson of St. Robert, MO; his paternal-grandparents, Alan and Joan York of Richland, MO; his maternal grandmother, Patsy Ogle of Richland, MO; a sister, Amanda Bates of Waynesville, MO; and a brother, Andy York of Salem, OR; as well as a host of other nieces, nephews, aunts, uncles, and cousins. Steven was preceded in death by his maternal grandfather, Jack Henson; and one brother, Justin Needs. Services were held at 6:00 p.m. Thursday, July 18, 2019 in the Memorial Chapel of Richland with Pastor Matt Brady officiating. Favorite recorded music included, “Go Rest High on that Mountain” and “Amazing Grace.” Services were under the care and direction of Memorial Chapel of Richland, Missouri.

Steven Kenneth York was born February 24, 1982 in Columbia, Missouri. He passed away Tuesday, July 9, 2019 in his home in Richland, Missouri having attained the age of 37. Steven grew up in Richland where he attended school and graduated from... View Obituary & Service Information

The family of Steven Kenneth York created this Life Tributes page to make it easy to share your memories.