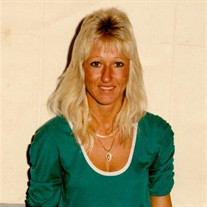 Susan Kay Perry, daughter of Harry Hubert “Ike” Isner and Helga Louisa (Reidner) Isner, was born December 17, 1954 in Wurtzburg, Germany where she lived until the age of four. In the 1970s, Susan’s parents bought a home in the Waynesville area and she graduated from Waynesville High School. While growing up, Susan enjoyed playing softball, t-ball and soccer as well as the video game Pac-Man. Susan was united in marriage to John Steven Perry in Waynesville, Missouri. They lived all their married life here and were blessed with three children: Mandy, John Jr. and Zachary. She loved caring for her family and her home. Susan worked for a time at Bales Construction and at the Pulaski County Courthouse and then began working at the Waynesville Career Center where she was employed for 20 years before retiring in 2014. In her spare time, Susan enjoyed being outdoors while fishing and camping out with her family. She was a very talented creative person and played the guitar and was a very good artist. She also donated time with the SALT (Saving All Lives Together) Program. Susan passed away Friday, February 12, 2016, in the Mercy Hospital of Springfield, Missouri having attained the age of 61 years, 1 month and 26 days. She will be sadly missed, but fondly remembered by all those that knew and loved her. Susan leaves to cherish her memory her husband, John of the home; three children, Mandy Bays of Waynesville, MO, John Perry Jr of Springfield, MO (fiancé La’Shunda), and Zachary Perry Sr. (fiancé Marissa); a grandson, Zachary Perry Jr; her mother, Helga Isner of Waynesville, MO; two sisters, Peggy Anderson of Waynesville, MO, and Anita Perry of St. Robert, MO; her brother, Harry Isner Jr of Waynesville, MO; her mother-in-law, Joann Hansen of Waynesville, MO; a brother-in-law, Dennis Perry (Leah) of West Virginia; a sister-in-law, Lana Zollman (John) of Waynesville, MO; a number of nieces and nephews; as well as a host of other relatives and friends. Susan was preceded in death by her father: Ike Isner and her father-in-law: John Junior Perry. Services were held at 11:00 a.m. Thursday, February 18, 2016 in the Memorial Chapels and Crematory of Waynesville / St. Robert with Pastor Danny Graves officiating. The songs “Free Bird”, “Stairway to Heaven”, “Tears in Heaven”, Hallelujah” and “Spirit in the Sky” were played. Serving as escorts were John Steven Perry, Sr., John Steven Perry, Jr., Zachary Allen Perry, Sr., Steve Gruenef, Ben Dumas and John Zollman. Burial followed in the Sunset Memorial Estates Cemetery of Waynesville. A memorial has been established in memory of Susan Perry, and contributions may be left at the funeral home.

The family of Susan Kay Perry created this Life Tributes page to make it easy to share your memories.