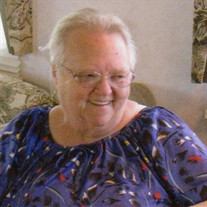 Sybil Lea Barton Tate, daughter of the late Charles T. and Iler (Collins) Moffett was born August 9, 1933 in Dodson, Louisiana. Sybil grew up in Winnfield, Louisiana where she remained until 2001. At an early age Sybil made a profession of faith, accepting Jesus Christ as her personal Lord and Savior and followed Him in baptism at Corinth Baptist Church in the Corinth Community of Winn Parish. After Sybil obtained her GED she furthered her education in business attending Huey P Long Trade School in Winnfield, Louisiana. Sybil met John “Herman” Barton in 1948. The two were married on October 12, 1951 in Winnfield, Louisiana where they lived and worked while raising their two children, Roland Eugene and Mary Ann. They shared nearly forty wonderful years together before Herman’s passing on February 22, 1991. Sybil worked seven years as a bookkeeper at the Brewton-Taylor Lumber Company before going to work at Winnfield Veneer Company as their bookkeeping office manager for twenty one years; retiring in 1991. Sybil’s hobbies included sewing, quilting, crocheting and fishing. She was, also, an excellent cook and enjoyed having her family and friends over for meals. Sybil was a hardworking woman yet she always found time to tend the needs of others before her own. Sybil married Frank Allen Tate, on December 4th 2000. Sybil and “Al,” along with their spouses had shared friendship and fun for over twenty years; this due to Mary Ann (Sybil’s daughter) dating and later marrying Terry (Al’s son). Sybil and Al traveled a lot the first few years of marriage. The newlyweds decided to move to Richland, Missouri in 2004 where they began the next chapter of their lives together. They wasted no time searching out a church home and became beloved members of Grace Baptist Church in 2004 serving faithfully wherever they were needed. Sybil and Al especially loved singing praises to their Lord for anyone who would lend an ear. Their music ministry took them to many nursing homes, churches and jam sessions, far and wide, along with their friends Roy York, Zane and Willene Rowden, Wes and Mary Lou Elzy, Ela Mae Crossland, along with the late John Crossland and Willard Arnold playing music and singing. Unfortunately, in 2009, Sybil suffered a debilitating stroke that took away use of her right side and her speech. Al went home to be with the Lord on March 21, 2011 with Sybil by his side. Though their music may have died, the song in Sybil’s heart played on. Her courage and strength from the Lord radiated out to those around her. Her faith was as solid as “The Rock” she stood on. At 12:18 AM Wednesday, September 20, 2017, while Mary Ann was holding her hand with Terry by her side, Sybil’s spirit soared into the arms of God, who she served so faithfully after having attained the age of 84 years, one month and 11 days. Sybil will always be sadly missed, but lovingly remembered by those who knew and loved her. She leaves behind to cherish her memory two children: Roland Eugene Barton of Montgomery, LA and Mary Ann Tate (son-in-law/step-son, Terry) of Richland, MO; her step-children: Randall Tate (Freda) of West Plains, MO and Sheila Collins (Rob) of Stoutland, MO; 4 grandchildren: Brad Barton (Amy) (a very special grandson, who was like a son to Sybil), Jeremy Tate (Rebecca), Sara Cassidy (Eric) and Scott Barton (Jennifer); 8 step-grandchildren; 7 great grandchildren and 3 great-great grandchildren; numerous step great grandchildren, and a host of other relatives and friends. In addition to her father in 1949, her mother in 1999, her step-father, Harrison Long in 1957, Sybil was preceded in death by her first husband, Herman and second husband, Allen; one infant brother; granddaughter-in-law, Teresa Barton and daughter-in-law, Susan Barton. Sybil was a loving daughter, wife, mother, aunt, grandmother and friend. She can now find rest in the arms of her loving Lord because Sybil did fight the good fight, Sybil did finish her course, and “Sybil always kept her faith”. God surely saw that twinkle in Sybil’s eye when He said, “Well done my good and faithful servant…Welcome home!” A service was held at 11:00 a.m., Saturday, September 23, 2017 in Grace Baptist Church with Pastor Fred Bobe officiating. Grandson, Jeremy Tate read the obituary and granddaughter; Sara Cassidy shared special memories of her Grandma “Sibs” and Mary Ann Tate wrote a touching letter about her mama. Pianist, Mary Ann Tate accompanied John Smith as they sang “I know Who Holds Tomorrow,” other congregational music included, “Victory in Jesus”, “Mansion over the Hilltop” and “When the Roll is called up yonder.” Favorite recorded music included “Gloryland Hold On” by Brad, Bryar & Bayes Barton and “City on the Hill” by Sybil & Allen Tate. Louisiana services were held at 3:00 p.m., Monday, September 25, 2017 is Southern Funeral Home, Winnfield, Louisiana with grandson, Brad Barton officiating. Songs included, “He Will Listen to You,” sung by Troy Hatten and Bryar Barton; “Gloryland Hold On,” “I Sure Miss You” and “Look for me” were by Brad, Bryar and Bayes Barton. Burial followed in the Garden of Memories Cemetery of Winnfield, Louisiana. Services were under the direction of Memorial Chapel of Richland. Memorial contributions may be made in loving memory of Sybil Barton Tate and can be left at the funeral home. Online condolences can be sent at www.memorialchapelsandcrematory.com.

Sybil Lea Barton Tate, daughter of the late Charles T. and Iler (Collins) Moffett was born August 9, 1933 in Dodson, Louisiana. Sybil grew up in Winnfield, Louisiana where she remained until 2001. At an early age Sybil made a profession of... View Obituary & Service Information

The family of Sybil Lea Barton Tate created this Life Tributes page to make it easy to share your memories.