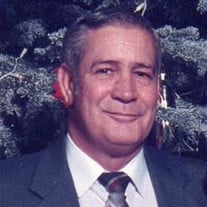 Talmage Darriel McDaniel departed this life the afternoon of Friday, March 24, 2017 in the loving arms of his wife, Ok-Cha having attained the age of 76 years. He was the son of the late James William and Edith Malderine (Hudson) McDaniel and was born in Leachville, Arkansas on December 22, 1940. His family moved to Holland, Missouri where he attended school until the ninth grade before moving to Richland, Missouri graduating from Richland High School in 1958. MSG McDaniel entered the United States Army on Jan 14, 1959 and served more than 20 years before retiring on Feb 29, 1980 at Ft. Leonard Wood, Missouri. He earned several service medals while proudly serving his country which included the National Defense Service Medal, Vietnam Service Medal w/2 Silver Service Stars, Vietnam Service Medal w/2 Bronze Service Stars, Bronze Star Medal w/Oak Leaf Cluster, Bronze Star Medal w/V Device, Senior Aircraft Crewman Badge, Armed Forces Expeditionary Medal, Republic of Vietnam Campaign Medal, Air Medal(5), Good Conduct Medal (5), Expert Qualification Badge M16, Vietnam Cross of Gallantry w/Palm (USARV), and the Meritorious Service Medal. Talmage met a beautiful Korean woman while stationed in Korea and asked for her hand in marriage. On January 28, 1973, he and Ok-Cha Hong were wed at the Church of Christ in Richland, Missouri. Together they shared over forty-four wonderful years together with lots of laughter and joy, even through the good times and bad, their love and devotion to one another was immense. They were blessed by the birth of their two sons, Danny and Darriel. After his retirement from the military, Talmage moved to California working for Lockheed Aircraft where he built L-1011 wide-body passenger aircrafts. He went on to work at Rockwell and had worked on the space shuttle; then he went on to build B-1 Bombers. Talmage would soon move again to Dallas, Texas where he built the AWACS Radar Systems. He was forced to medically retire in 1991 moving back to California where he lived until 1994 before coming home to Richland. When Talmage was able; had attended the Church of Christ Church here in Richland. In his spare time he enjoyed traveling all over these United States, he loved fishing, hunting and playing cards. He was very proud of his Cherokee Indian heritage and would gladly mention that he was half Indian. Talmage was preceded in death by his parents, three brothers: J. D. McDaniel and his wife, Margaret, Harold L. McDaniel and Charlie McDaniel and his wife Glenna; two sisters: Loreata Ellis and Hazel Harmon and her husband, Odis. Talmage leaves behind to cherish his memory his loving wife, Ok-Cha of Richland, MO; four children: Daryl (Joyce) McDaniel of Chicago, IL, Tamara from the state of WA, Danny (Angie) McDaniel of San Diego, CA and Darriel McDaniel of MO; two brothers: Donald McDaniel of Marshfield, MO and Kenneth (Dalene) McDaniel of Jefferson City, MO; two sisters: Glenna (Don) Scott of Waynesville, MO and Deloris (Gary) Bates of Springfield, MO; one brother-in-law: Kenneth Ellis of Little Rock, AR; seven grandchildren; several nieces, nephews and other relatives and friends. Talmage was greatly loved and well respected. He was a good man who enjoyed his life and family and will certainly be missed. Services were held at 11:00 a.m., Friday, March 31, 2017, in the Memorial Chapel of Richland, Missouri with United States Army Chaplain, John Manuel officiating. Recorded music selections included, “Go Rest High on that Mountain” and “The Old Rugged Cross.” Serving as escorts were the United States Army. Burial with Military Honors followed in the Oaklawn Cemetery of Richland, Missouri. Services were under the direction of Memorial Chapel of Richland, Missouri. As the old song goes...“Go Rest High on that Mountain Talmage.” Your work here is done; rest in peace. Memorial contributions may be made in memory of Talmage McDaniel and can be left at the Memorial Chapel of Richland funeral home. Online condolences can be sent at www.memorialchapelsandcrematory.com

Talmage Darriel McDaniel departed this life the afternoon of Friday, March 24, 2017 in the loving arms of his wife, Ok-Cha having attained the age of 76 years. He was the son of the late James William and Edith Malderine (Hudson) McDaniel and... View Obituary & Service Information

The family of Talmage D. McDaniel created this Life Tributes page to make it easy to share your memories.

Talmage Darriel McDaniel departed this life the afternoon of...