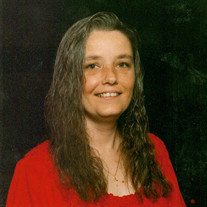 Tamera Annette Wagner, daughter of Oliver Goldsmith Thomson and Janet Sue (Vandergriff) Thomson, was born June 17, 1961 in Ft. Leonard Wood, Missouri. Due to her father being in the military, Tamera and the family were transferred to different duty stations, but she spent the majority of her growing up years in Mississippi and graduated from St. Martin High School in Ocean Springs, Mississippi. On September 7, 1979, Tamera was united in marriage to Donald Edward Sapp in Biloxi and two children were born to this union, Angela and Jason. On April 14, 2000, Tamera was united in marriage to Dana Lynn Wagner in Ft. Smith, Arkansas. While living in Mississippi, Tamera worked as a bookkeeper and a pharmacy assistant. In her spare time, Tamera enjoyed sewing, cross stitching, and doing wood working with her dad. She loved animals and also liked listening to the One Arm Bandit. She was an avid collector of many things and loved going to yard sales and finding a good bargain. Her favorite thing to do was to spend time with her children and grandchildren. As a young girl, Tamera grew up in church and was very active. She sang on the church radio broadcast and in the church choir. In her later years when her health permitted, Tamera attended the Pentecostal church in Lebanon. Tamera was a very giving person and donated to several clubs and organizations. Tamera went home to be with her Lord Tuesday, June 7, 2016 in her home having attained the age of 54 years. She will be sadly missed, but fondly remembered by all those that knew and loved her. Tamera leaves to cherish her memory, her daughter: Angela Renee Fries and husband Matt of Lebanon, MO; one son: Jason “Gator” Edward Sapp and wife Noelle of Strafford, MO; her father and stepmother: Oliver and Linda Thomson of Springfield, MO; three siblings: Timothy Thomson of Crocker, MO, Melody Thomson of Houston, TX and Darla Swiatowy of Ocean Springs, MS; one stepbrother: Terry Ladner of Springfield, MO; one stepsister: Kristi Ladner of Springfield, MO; ten grandchildren: Brooklynn Paige Fries, Falicadi Jade Fries, Thessalon Ferrie Annette Fries, Edward Mathias Fries, Abram Matthew Fries, Deke Sapp, Liberdy June Sapp, Patience Jane Sapp, Lucian Edward Sapp, Jeff Glen Sapp; two great grandchildren: Trevor James Sapp and Lillith Ann Sapp; other relatives and friends. Tamera was preceded in death by her mother, Janet Sue (Vandergriff) Thomson. Services were held at 10:00 a.m. Saturday, June 11, 2016 in the Memorial Chapels and Crematory of Waynesville / St. Robert with Pastor Chris Thornton officiating. The songs “Wind Beneath My Wings” by Bette Midler, “With Arms Wide Open” by Creed and “Daddy’s Hands” by Holly Dunn were played. Serving as escorts were Nathen Wright, Ricky Eouff, Jefferson Sapp, Randy Sapp, Matt Fries and Levi Thurston. Serving as honorary escorts were Wade Green D’Ray Wagner, Jimmy Stover, Daniel Broach and Terry Ladner. Burial followed in the Deerlick Cemetery of Waynesville, Missouri. Memorial contributions may be made in memory of Tamera Wagner and may be left at the funeral home.

Tamera Annette Wagner, daughter of Oliver Goldsmith Thomson and Janet Sue (Vandergriff) Thomson, was born June 17, 1961 in Ft. Leonard Wood, Missouri. Due to her father being in the military, Tamera and the family were transferred to... View Obituary & Service Information

The family of Tamera Annette Wagner created this Life Tributes page to make it easy to share your memories.