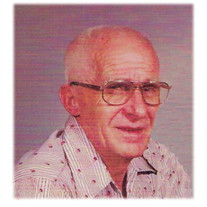 Teddy Joe Hammock, son of the late Clifford and Ruth (Gladden) Hammock, was born August 27, 1930 in Laquey, Missouri where he grew up and attended school. In 1948, Ted entered the United States Army and served his country faithfully until his honorable discharge in 1952. He was a combat veteran of the Korean War and recipient of the Purple Heart and numerous other awards. On March 5, 1952, Ted was united in marriage to Marceline Faye Payne in Laquey, Missouri. They shared over 53 years of marriage together and were blessed with eight children: Cliff, Joyce, Cheryl, Pam, Danny, Bill, Mark and Gary. Faye preceded him in death on May 18, 2006. Ted worked hard to provide for his family and he worked a number of years as a heavy equipment operator at the family rock quarry in Laquey. He also was employed at Oakwood Oil Company in St. Robert from 1970 until his retirement. In his spare time, Ted enjoyed working on his farm with his heavy equipment. He also enjoyed spending time with his family and friends and he was always ready with a story to share. Ted passed away Saturday, July 25, 2020 in the Phelps Health Hospital of Rolla, Missouri having attained the age of 89 years. Ted will be sadly missed, but fondly remembered by all those that knew and loved him. He leaves to cherish his memory, his eight children: Cliff Hammock (Tammy) of Springfield, MO, Joyce Hammock, Pam Smith (Ron), Cheryl Winningham (Carl), Danny Hammock, Mark Hammock, Bill Hammock (Rhonda), and Gary Hammock (Jennifer) all of Waynesville, MO; thirteen grandchildren and a number of great-grandchildren; his brother Sam Hammock (Bonnie) of Nixa, MO; a number of nieces and nephews; as well as a host of other relatives and friends. In addition to his parents and wife, Ted was preceded in death by one granddaughter: Tiffany Schaffer; one brother: Bill Hammock; and two sisters: Mavis Sizemore and Maxine Turner. Funeral services were held at 12:00 p.m. Thursday, July 30, 2020 in the Memorial Chapels and Crematory of Waynesville with Pastor Danny Graves officiating. The songs “This Ole’ House/When the Saints Go Marching In” by the Cathedral Quartet and “I’ll Fly Away” by Roy Acuff were played. Serving as escorts were Danny, Gary, Eric, Nathan, Gary Jr., and Jon Hammock. Burial with military honors followed in the Waynesville Memorial Park Cemetery of Waynesville. Military honors were provided by the Missouri Honors Team.

Teddy Joe Hammock, son of the late Clifford and Ruth (Gladden) Hammock, was born August 27, 1930 in Laquey, Missouri where he grew up and attended school. In 1948, Ted entered the United States Army and served his country faithfully... View Obituary & Service Information

The family of Ted J. Hammock created this Life Tributes page to make it easy to share your memories.