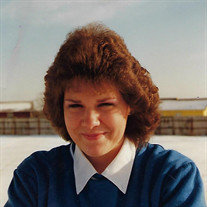 Teressa Ann Massey, daughter of Paul and Mary Ann (Green) Anderson, was born January 17, 1965 in Waynesville, Missouri. She grew up in Crocker and graduated from Crocker High School. She was blessed with two children Tonya and Bradley. On May 16th, 1987, Teressa was united in Marriage to Kurt Leon Massey in Lebanon, Mo. During 31 wonderful years of Marriage they were blessed with another daughter Samantha. Teressa was a hardworking woman and was proud of helping to provide for her family. She worked at the Tan-Tar-A Resort Marriott at Lake of the Ozarks for a time and then began working at the Busy Bee Laundry in Rolla before working at Fairfield Inn Marriott in St. Robert. In her spare time, Teressa enjoyed collecting old buttons, marbles, arrowheads, unusual rocks, old keys and other artifacts. She had quite the collection. Most importantly, she loved spending time with her family and especially enjoyed her grandchildren. Teressa had made a profession of faith at an early age and was a member of the Hilltop Church of Crocker, Missouri. Teressa went home to be with her Lord Friday, May 25, 2018, in her home in Devil’s Elbow having attained the age of 53 years. She will be sadly missed but fondly remembered by all those that knew and loved her. Teressa leaves to cherish her memory, her loving husband, Kurt, of the home; her children, Tonya Anderson of Devil’s Elbow, MO, Bradley Anderson of Lebanon, MO, and Samantha Davila Perez and her husband, Yomar Davila Perez of Waynesville, MO; her parents, Paul and Mary Anderson of Crocker, MO; Four sisters, Mary Kay Davis of Swedeborg, MO, Christy Summers of Lebanon, MO, Roxie Coleman of Lebanon, MO, and Dorothy Gleave of Richland, MO; Three brothers, Pat Anderson of Swedeborg, MO, Andy Anderson of Swedeborg, MO, and Paul Gene Anderson of Chetopa, KS; Five grandchildren, Terence Brown, Trysta Anderson, Makenzie Anderson, Natalie Anderson, and Jayden Davila Perez; a number of nieces and nephews; as well as a host of other relatives and friends. Teressa was preceded in death by one sister, Elaine Anderson. Services were held at 10:00 a.m. Wednesday, May 30, 2018 in the Memorial Chapels and Crematory of Waynesville / St. Robert with Pastor Bill Claiborn officiating. Larry Zeigenbein read Scripture and recalled his wonderful memories of Teressa. Letters from Teressa’s dearest friends, Michele and Reba were read. Soloist Adam Howlett sang “Amazing Grace (My Chains Are Gone) and the songs “I Can Only Imagine”, “Go Rest High on that Mountain” and “I’ll See You Again” were played. Serving as escorts were Tee Brown, Yomar Davila Perez, Jimmy Walters, Jake Smith, Todd Doyle and Roger Hays. Serving as honorary escorts were Mike Henderson and Adam Howlett. Burial followed in the Goodall Cemetery in Phelps County, Missouri. Memorial Contributions in memory of Teressa Massey may be made to Hospice Compasses, and may be left at the funeral home.

Teressa Ann Massey, daughter of Paul and Mary Ann (Green) Anderson, was born January 17, 1965 in Waynesville, Missouri. She grew up in Crocker and graduated from Crocker High School. She was blessed with two children Tonya and Bradley.... View Obituary & Service Information

The family of Teressa Ann Massey created this Life Tributes page to make it easy to share your memories.