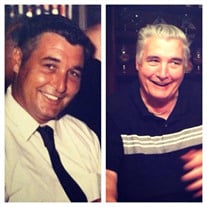 Terry Wayne MacFalls, son of the late Willard and Eleanor (Erickson) MacFalls, was born May 28, 1941 in Rockford, Illinois. As a young boy, Terry and his family left Illinois and lived in Wisconsin for a short time before moving to Los Angeles, California where he attended St. John Bosco High School. Terry was raised in the Catholic faith and served as an altar boy for a time. At the age of 18, Terry entered the United States Marine Corp and served his country faithfully until his honorable discharge. Terry was united in marriage to Catherine D. Wilbur and they shared 43 years together before she preceded him in death. They were blessed with three children: Daryl Wayne, Gregory James, and Kelly Marie. Daryl and Gregory also preceded him in death. In most recent years, Terry has been residing in Waynesville, Mo, where he shared joyous loving companionship with Josie Gunther. Terry always had a diligent work ethic and he held to values of honesty and generosity. He had a strong moral compass and was a advocate for “The Working Man”. For many years, Terry worked as an iron worker in the High Rise Steel construction business and was a proud member of the ironworkers local 433. In his spare time, Terry enjoyed being outdoors while fishing, golfing or riding his motorcycle. He was a car enthusiast, as well as a gun enthusiast and was a member of the National Rifle Association. He enjoyed bowling and watching movies. Some of his favorite movies included: The Searcher’s, Bridge Over the River Kwai, The Good, the Bad and the Ugly, and The Magnificent Seven. He was an avid student of history and science, and was a nature buff. Terry always excelled at his endeavors and he experienced the thrill of achieving a hole one in his golfing adventures. He also reached the ultimate goal of bowling a perfect score of 300 - not once - but twice! Terry also liked to sing. He was known for his great big booming singing voice and if you asked him, he thought he was Elvis! We all thought so too!! Most importantly, he loved his family and treasured the time he could spend with them. Terry passed away Wednesday, September 3, 2014 in the General Leonard Wood Army Community Hospital of Fort Leonard Wood, Missouri having attained the age of 73 years, 3 months and 6 days. He leaves to cherish his memory, his daughter: Kelly Hosking and husband Paul of Kildeer, IL; one granddaughter: Jennifer MacFalls of Hollister, CA; dear friend and partner: Josie Gunther of Waynesville, MO; other relatives and friends. Terry was a strong and charismatic force “to be reckoned with” along with being the most kind and generous person you could ever meet. He will be sadly missed by all of those that knew and loved him, we will treasure his contagious laugh and hold him in our hearts forever. Services with military honors were held at 11:00 a.m. Monday, September 8, 2014 in the Memorial Chapels and Crematory of Waynesville / St. Robert with Rev. Christopher Hendrix officiating. Terry's daughter, Kelly Hosking, sang "Daddy's Hands" and her husband, Paul Hosking recalled his wonderful memories of Terry. The songs "Bridge Over Troubled Water", "Try to Remember" and "I Did It My Way" were played.

Terry Wayne MacFalls, son of the late Willard and Eleanor (Erickson) MacFalls, was born May 28, 1941 in Rockford, Illinois. As a young boy, Terry and his family left Illinois and lived in Wisconsin for a short time before moving to Los Angeles,... View Obituary & Service Information

The family of Terry Wayne MacFalls created this Life Tributes page to make it easy to share your memories.