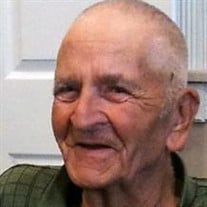 Thomas Gilbert Allen Sr. was born July 29, 1938 to Thomas Elmer Allen, Sr. and Nellie Olive (Hurley) Allen, on the family’s farm in Pulaski County, Missouri. He attended school in Richland until the eighth grade. “Tom,” as he was known by, never ventured far from the community in which he enjoyed and loved so much. At age 19, Tom accepted Christ and was baptized at Baden Baptist Church in St. Louis, Missouri. However, later became a member of Pleasant Grove Baptist Church near Lebanon, Missouri where he attended, as long as his health permitted. Tom loved the fellowship and his church family. He always looked forward to seeing them again. Tom married Shirley Darlene Steward on April 30, 1964. Together, they shared 47 years together before her passing on September 12, 2011. Tom worked at McDonald Douglas in St. Louis, Missouri before coming back home to Richland where he then began working the next 18 years for Denver Sullen’s Sawmill. Tom also logged several years with Robert Ogle before working at Ozark Fisheries near Stoutland. He looked forward to weed eating and mowing grass there. Tom once stated to a friend...“I just enjoy working a great deal!” Tom was known to shoot the breeze with folks from time to time and always told the guys that he was going to stop weed eating when he turned 80...and he did. Tom loved hunting, fishing, driving around the ponds with his brother-in-law, Larry, frog hunting, and sittin in a chair by one of the ponds shootin turtles for hours! Tom went home to be with his Lord and Savior Saturday, December 15, 2018, while in Republic, Missouri, having attained the age of 80. He leaves behind to cherish his memory his son, Thomas Allen, Jr. and his fiancé, Laura Hall of Republic, MO; his brother-in-law, Larry Steward of Richland, MO; nephews, Richard Steward of Richland, MO and Mike Allen of Osage Beach, MO; several grandchildren and great grandchildren; as well as, a host of other special relatives and friends. Tom was preceded in death by his parents, his wife, Shirley, one daughter, Tammy Jo Frye, a sister, Ruby Irene Patton, and brothers, Lloyd and Wayne Allen. Tom was a kind hearted man. He loved the special people in his life and never failed to let them know just how he felt about them. Tom will be sadly missed however he leaves a lifetime of memories that’ll warm the hearts of those who knew and loved him. Services were held at 1:00 p.m. Saturday, January 5, 2019 in the Pleasant Grove Baptist Church near Lebanon, Missouri with Pastor Mike Allen officiating. Special music was provided by soloists, Sherry Wilson and Pastor Mike Allen who played the guitar and was accompanied by guitarist, Pete Wilson. Inurnment followed the in the Pleasant Grove Cemetery. Arrangements were under the care and direction of Memorial Chapel of Richland, Richland, Missouri. Memorial Contributions may be made in memory of Tom Allen, Sr. and may be left at the Memorial Chapel of Richland. Online condolences may be sent to www.memorialchapelsandcrematory.com

The family of Thomas Gilbert Allen SR. created this Life Tributes page to make it easy to share your memories.