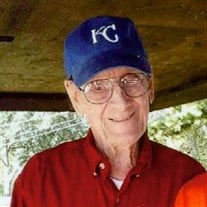 Thomas Eugene Goad, son of the late Felix and Gladys (Waters) Goad, was born February 12, 1930 in Esther, Missouri. He passed away Sunday, December 18, 2016 in the Crown Care Center of Harrisonville, Missouri having attained the age of eighty-six years, ten months and six days. As a young boy, Thomas grew up in the St. Louis area. It was there that he met and married Wilma Taylor in May 1951. They were blessed with five children: Mary, Betty, Paula, Tommy and Alice. He was preceded in death by his parents, his wife Wilma Goad, one daughter Paula Boggs, two grandsons Andy Horning and Leon Winnie. His brothers Bill, Jim, Harry, and Mike Goad. Thomas continued to live in the St. Louis area until the late 1970s when he moved to Ivy Bend, Missouri. In 2011, Thomas moved to the Waynesville, Missouri area and has been here the last seven years. Thomas was a hardworking man as a carpenter. He was an avid collector of cast iron old tractors, antique cars and his love for automobiles prompted him in his early years to race stock cars. He also enjoyed being outdoors while fishing, hunting or just going camping. In his later years he became an artist. He enjoyed painting pictures of tractors, trains, lighthouses and many other types of scenery. He professed his faith in Christ at a young age. His greatest joy in life was getting to spend time with his grandchildren and great grandchildren whenever he was able. He will be missed by them greatly and each one meant the world to him. Thomas will be sadly missed, but fondly remembered by all those that knew and loved him. Survivors include Mary Galler (Lonny) of Lebanon, MO, Betty Winnie (Steve) of Gunn City, MO, Tommy Goad (Sharon) of Stover, MO, and Alice Urbas (Frank) of Waynesville, MO; his son-in-law, Richard Boggs (Patty) of Belton, MO; thirteen grandchildren; thirty-one great-grandchildren; two great-great-grandchildren; a brother, Butch Goad of Osage Beach, MO; two sisters, Joyce Oakley of Barnhart, MO and Pat Brown of Greenville, MO; a sister-in-law, Joyce Goad of Richland, MO; a number of nieces and nephews; as well as a host of other relatives and friends. Services were held at 4:00 p.m. Friday, December 23, 2016 in the Memorial Chapels and Crematory of Waynesville / St. Robert with Pastor Lucas Malott and Pastor Steve Winnie officiating. Soloist Lonny Galler sang “Amazing Grace” and the songs “Wind Beneath My Wings”, “I Can Only Imagine’ and “Go Rest High on that Mountain” were played. Memorial contributions may be made in memory of Thomas Goad and may be left at the funeral home.

Thomas Eugene Goad, son of the late Felix and Gladys (Waters) Goad, was born February 12, 1930 in Esther, Missouri. He passed away Sunday, December 18, 2016 in the Crown Care Center of Harrisonville, Missouri having attained the age of eighty-six... View Obituary & Service Information

The family of Thomas Eugene Goad created this Life Tributes page to make it easy to share your memories.