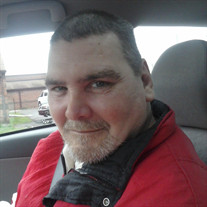 Thomas Erwin Howell, son of the late Roy Eugene and Mary Janice (Pry) Howell, was born July 22, 1957 in Canton, Ohio where he grew up and graduated from high school. At the age of 18, Tom moved to the Waynesville / St. Robert area and fell in love with the area. He moved several other places including Springfield, but always returned to Pulaski County. During his working years, Tom worked for multiple restaurants. In his spare time, he was an avid sports fan, especially football and baseball and loved to keep up the team stats and other information. He enjoyed playing card and board games and loved to play baseball. Most importantly, he loved spending time with his family and friends. Several years ago, Tom made an important decision in his life and accepted Jesus Christ as his Savior. He loved gospel music, but especially the Gaither Vocal Band. Tom went home to be with his Lord, Wednesday, April 13, 2016 in the Springfield Skilled Care & the Lodges of Springfield, Missouri having attained the age of 58 years. He will be sadly missed, but fondly remembered by all those that knew and loved him. Tom leaves to cherish his memory six siblings: Janice Howell and her daughter, Meggan Howell of St. Robert, MO, Patricia Runyon (Danny) of Canton, OH, Bob Howell (Lynn) of Hartville, OH, James Howell of North Canton, OH, Rick Howell (Pam) of Kilgore, OH and Kathleen Flohr of Sioux City, IA; two other nieces; seven nephews; four great nieces; three great nephews; several other relatives and friends. In addition to his parents, Tom was preceded in death by one sister, Diana Howell. Services were held at 5:00 p.m. Saturday, April 16, 2016 in the Memorial Chapels and Crematory of Waynesville / St. Robert with Ben Church officiating. The songs “The King is Coming” by the Gaither Vocal Band, “Untitled Hymn” by Chris Rice and “Centerfield” by John Fogerty were played. Memorial contributions may be made in memory of Thomas Howell and may be left at the funeral home.

Thomas Erwin Howell, son of the late Roy Eugene and Mary Janice (Pry) Howell, was born July 22, 1957 in Canton, Ohio where he grew up and graduated from high school. At the age of 18, Tom moved to the Waynesville / St. Robert area and... View Obituary & Service Information

The family of Thomas Erwin Howell created this Life Tributes page to make it easy to share your memories.