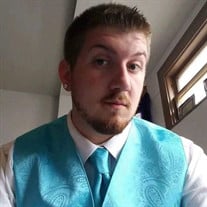 Thomas Raymond Hurt, son of Robert Altonio Hurt and Benita Marie (Trombley) Hurt Wood, was born November 24, 1992 in Rolla, Missouri. As a young boy, Thomas grew up in Waynesville, Missouri where he attended and graduated from Waynesville High School. While living in Waynesville, he attended Divine Ministry Church where he made a profession of faith and enjoyed his time worshipping there. Thomas worked for Sellers-Sexton Ford in St. Robert and Walmart of St. Robert before moving to Quincy, Illinois where he worked for Jim’s Motors. The past two months he worked as a delivery truck driver for Fed Ex and Harrison Delivery. In his spare time, Thomas enjoyed being outdoors while hunting and fishing. He was an avid football fan; he liked to play football and watch football (especially the Indianapolis Colts). He also enjoyed playing his X-Box, but especially he loved spending time with the love of his life, Stevie and their two dogs: Lainey Mae Hurt and Shelby Lynn Hurt. Thomas passed away Friday, October 2, 2020 due to injuries sustained in a motor vehicle accident near Arbela, Missouri having attained the age of 27 years. He will be sadly missed, but fondly remembered by all those that knew and loved him. Thomas leaves to cherish his memory, his mother and stepfather: Benita and Deanie Wood of Waynesville, MO; the love of his life: Stevie Lee Walker of Quincy, IL; aunt: Dana Wood of Newburg, MO; other relatives and a host of friends. Celebration of Life services were held at 12:00 p.m. Saturday, October 17, 2020 in the Higher Call Worship Center of Newburg, Missouri with Pastor Dana Wood officiating and Paul and Steve Wood, both spoke as well. The songs “Go Rest High on that Mountain” and “Look For Me” were sung and “One More Day” by Rascal Flatts was played. Arrangements were under the direction of Memorial Chapels and Crematory of Waynesville / St. Robert. Memorial contributions may be made in memory of Thomas Hurt and may be left at Memorial Chapels and Crematory of Waynesville / St. Robert.

The family of Thomas Raymond Hurt created this Life Tributes page to make it easy to share your memories.