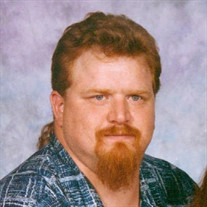 Thomas “Red” W. DeKorsey, son of the late Thomas and Ruthane E. (Crecelius) DeKorsey, was born August 24, 1964 in Fort Leonard Wood, Missouri. Red, as he was known by his family and friends, grew up in Waynesville and St. Louis. He graduated from Waynesville R-VI School District in 1982. Shortly after graduation, Red joined the United States Army and went to Ft. Polk, Louisiana and Germany and after his honorable discharge, “came back to the place he was never coming back to”. In 1986, Red went to work for Ham Auto Vending. He then worked for Anderson Distributing. In 2005, he started working for the United State Postal Service as a contract carrier until his health declined. On October 16, 1983, Red was united in marriage to Rebecca Rauhoff in Waynesville and they shared two sons, Brenden and Colby. In his spare time, Red enjoyed reading, woodworking and was an excellent cook. He loved being outdoors and you could find him either hunting or target practicing. Most importantly, he liked spending time with his family and friends. Red passed away Friday, June 12, 2015, near Waynesville having attained the age of 50 years. He will be sadly missed, but fondly remembered by all those that knew and loved him. Red is survived by two sons, Brenden and Colby DeKorsey of Waynesville, his former wife, Rebecca DeKorsey of Waynesville, and his brother, Robert DeKorsey of Waynesville; two aunts, one uncle, several cousins and many friends. Services were held at 1:00 p.m. Wednesday, June 17, 2015 in the Memorial Chapels and Crematory of Waynesville / St. Robert with Rev. Christopher Hendrix officiating. The songs “In-A-Gadda-Da-Vida” performed by Iron Butterfly and “Immigrant Song” by Led Zepplin were played. Serving as escorts were Brenden DeKorsey, Robert DeKorsey, Martin Lochert, Terry Pettijon, Derrick Biggs, Guy Hyman, Troy Frey and Curtis Currin. Burial with military honors followed in the Missouri Veterans Cemetery of Waynesville. Military honors were provided by the Missouri Honors Team. Memorial contributions may be made in memory of Thomas “Red” W. DeKorsey and may be left at the funeral home.

Thomas &#8220;Red&#8221; W. DeKorsey, son of the late Thomas and Ruthane E. (Crecelius) DeKorsey, was born August 24, 1964 in Fort Leonard Wood, Missouri. Red, as he was known by his family and friends, grew up in Waynesville and St.... View Obituary & Service Information

The family of Thomas "Red" W. DeKorsey created this Life Tributes page to make it easy to share your memories.