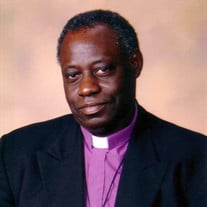 Bishop Thomas Earl Solomon was born on May 3, 1945 in Kinston, North Carolina. He was the youngest of 11 children born to the union of the late Simon Solomon, Sr. and Lottie (Jones) Solomon. Thomas was raised in Kinston, graduating from Jones High School where he was an accomplished varsity football player. Thomas was united in marriage to the love of his life, Angela Kim on January 18, 1971 in Seoul, Korea. They shared over 44 years of marriage together and were blessed with two daughters: Shirley and Lena. Thomas loved his family immensely. He said of his wife, “She stands beside me in all that we do. She’s an equal part in the ministry.” He was a cherished and loving father and according to the girls, the best dad ever. In 1963, Thomas entered the United States Army and served his country faithfully until his retirement after 23 years of service. He had earned the rank of First Sergeant and several medals and commendations; some of which include: National Defense Service Medal, Expert Infantry Badge, Overseas Service Ribbon-3, Army of Occupation Medal, Army Commendation Medal-2, Noncommissioned Officer Professional Development Ribbon-3, Army Good Conduct Medal-6, Armed Forces Expeditionary Medal (Korea), Army Service Ribbon and Drill Sergeant Identification Badge. He was stationed in Korea; Ft. Riley, Kansas; Bamberg and West Berlin, Germany; and Fort Leonard Wood, Missouri. Thomas continued his education and obtained his Associates Degree from Central Texas College in 1983, Bachelor of Arts Degree from Columbia College in 1994, Associate of Theology Degree from Gloryland Bible College in 1990 and was currently working on his Master’s Degree in Theology from Andersonville Theological Seminary. Thomas made an important decision early in his life and accepted Jesus Christ as his personal Savior. He answered the call of God and was ordained by The Missionary Church International (TMCI), and later became a Bishop. As an active member of TMCI, he served on mission trips, spoke at conferences, and helped uplift and encourage church leaders. For many years, he was pastor of Abundant Life Ministries in St. Robert, Missouri. He was the founder and president of Solomon’s Ministries International and served as an evangelist, ministering nationally and made several trips to Liberia, Nigeria, Uganda, Costa Rica, and the Dominican Republic. Through his ministry, he provided significant and ongoing support for an orphanage in Thailand and helped establish churches in Africa including the “Solomon’s Ministries Church School” in Liberia. In 2013, he launched a weekly podcast on blogtalkradio.com to reach the lost for Christ. He was a great man of God who prayed in the Spirit, walked in the Spirit and ministered in the Spirit. Bishop Solomon was known as Brother Solomon by everyone. He was a spiritual counselor, mentor, leader and friend to many individuals in the local area, nationally and to missionaries abroad. Thomas was generous, always on call and reaching out to those who need healing, encouragement, breakthroughs, and special prayer. His church home was Victory Fellowship Church of God in Waynesville where he ministered faithfully. Bishop Solomon went home to be with his Lord, Tuesday, January 20, 2015 in the General Leonard Wood Army Community Hospital of Fort Leonard Wood, Missouri having attained the age of 69 years. Thomas leaves to cherish his memory his loving wife: Rev. Angela Solomon of the home; two daughters: Shirley Solomon of Brooklyn, NY and Lena Solomon of Silver Spring, MD; one brother: Joseph Solomon of Newark, NJ; three sisters: Zelena Lawson of Irvington, NJ, Ruth Solomon Lee of Kinston, NC and Lottie Wheeler and husband Alfonzo of Franklinville, NJ; an abundance of nieces, nephews, other relatives and friends. In addition to his parents, Bishop Solomon was preceded in death by six siblings: Simon, Otha, John and Jack Solomon, Dorothy Graham and Ora Waters. Bishop Solomon’s biggest dream was fulfilled when he heard God say “Well done, my good and faithful servant.” Memorial contributions may be made in memory of Thomas Solomon to the organization of the donor's choice and may be left at the funeral home.

Bishop Thomas Earl Solomon was born on May 3, 1945 in Kinston, North Carolina. He was the youngest of 11 children born to the union of the late Simon Solomon, Sr. and Lottie (Jones) Solomon. Thomas was raised in Kinston, graduating from Jones... View Obituary & Service Information

The family of 1SGT (Ret) Thomas Earl Solomon created this Life Tributes page to make it easy to share your memories.