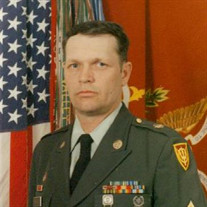 Thomas Arthur “Tom” Swearingin, Sr., son of Asbury Winfred and Gertrude Marcella Swearingin, was born October 29, 1949 in Excelsior Springs, Missouri where he grew up and attended school. At the age of 21, Tom entered the United States Army and served his country faithfully until his retirement after 20 years of service. He had attained the rank of Staff Sergeant. He earned several awards and commendations; some of which include: Army Achievement Medal, Armed Forces Expeditionary Medal, Army Commendation Medal 1st Oak Leaf Cluster, Army Service Ribbon, Good Conduct Medal 4th Award, NCPO Professional Development Ribbon w/numeral 2, National Defense Service Medal 2nd Award, Overseas Service Ribbon w/numeral 4, Driver and Mechanic Badge, Expert Marksmanship Bade Grenade and Expert Marksmanship Badge Rifle. On October 20, 1983, Tom was united in marriage to Patricia Ann Rearrick in Camdenton, Missouri and they shared over 33 years of marriage together. Upon their marriage, two families were blended and they shared three children: Tom, Robert and Judy. After retiring from the military, Tom began working as a civil service employee on Fort Leonard Wood and did so for 10 years. In his spare time, Tom enjoyed being outdoors while fishing and hunting. He liked to play cards and he and Pat enjoyed singing karaoke and dancing. Tom had a great sense of humor and loved joking around with his family and friends. His greatest joy came from his family and he looked forward to every moment he could spend with them. Tom was a lifetime member of the Francis J. Lynch VFW 3168 of Laquey, Missouri. Tom passed away Thursday, February 23, 2017, in the University of Missouri Hospital of Columbia, Missouri having attained the age of 67 years. He will be sadly missed, but fondly remembered by all those that knew and loved him. Tom leaves to cherish his memory, his wife: Pat of the home; three children: Thomas Swearingin, Jr (Jayne) of Burnsville, MN., Robert “Bob” Swearingin (Morgan) of Kansas City, MO, and Judy Miner (Mark) of Laquey, MO; eight grandchildren: Addym, Connor, Quinn, Oliver, Justin, Kristin, Jarrod, and Katlyn; his mother: Marcella Swearingin of Edwards, MO; four brothers: Jack, Peter, Larry and Dick Swearingin; and one sister: Susie Ash; a number of nieces and nephews; as well as a host of other relatives and friends. Tom was preceded in death by his father: Asbury Winfred Swearingin and two sisters: Ann and Peggy Lynn Swearingin. Services were held at 12:00 p.m. Wednesday, March 1, 2017 in the Memorial Chapels and Crematory of Waynesville / St. Robert with Pastor Danny Graves officiating. Tom’s son, Bob, recalled his wonderful memories of his dad. The songs “Amazing Grace” and “What A Day That Will Be” were performed by Willie and Ronnie White. Serving as escorts were the United States Army. Burial with military honors followed in the Missouri Veterans Cemetery of Waynesville. Military honors were provided by the United States Army of Fort Leonard Wood, Missouri. Memorial contributions may be made in memory of Tom Swearingin and may be left at the funeral home.

Thomas Arthur &#8220;Tom&#8221; Swearingin, Sr., son of Asbury Winfred and Gertrude Marcella Swearingin, was born October 29, 1949 in Excelsior Springs, Missouri where he grew up and attended school. At the age of 21, Tom entered the United... View Obituary & Service Information

The family of Thomas Arthur "Tom" Swearingin Sr. created this Life Tributes page to make it easy to share your memories.