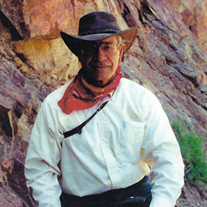 Thomas "Tom" Joseph Bohrer, son of the late Joseph A. Bohrer and Anne Martha (Traffas) Bohrer, was born August 7, 1940 in Nashville, Kansas. He passed away the morning of Monday, December 9, 2019 in the Life Care Center of Waynesville having attained the age of 79 years, 4 months and 2 days. As a young boy, Tom grew up in Zenda, Kansas and at the age of 13, he moved to St. Louis to attend Kirkwood Seminary for three years and graduated from Zenda High School. He continued his education by obtaining his Bachelor of Arts Degree in Business from Pittsburg State University in Kansas. In 1962, Tom entered the United States Army and served his country as an Army Infantry Airborne Ranger and earned the rank of First Lieutenant. He loved his country and was proud of his time as an Airborne Ranger. On May 9, 1964, Tom was united in marriage to Mary Mignon “Midge” Mooney at Fort Leonard Wood, Missouri. They shared over 55 years of marriage together and three children: Creg, Travis and Christy. After his time in the Army, Tom owned and operated M&S Motors in St. Robert, Missouri for 40 years. He was known in the community as a kind-hearted gentleman and was respected by all who knew him. He will be remembered for his honesty and integrity. In his spare time, Tom trained, owned and showed Missouri Foxtrotters for years with his family. He and his children spent many evenings riding in the barn together. Later in life, he rode mules and went on many wagon trail rides with his mule buddies. He enjoyed individual sports, such as tennis and racquetball. He was a fan of Kansas Jayhawks basketball, and loved cheering on his children at their sporting events. He was an avid hunter and raised bird dogs. Tom’s faith in Christ was important to him. He was a member of the St. Robert Bellarmine Catholic Church and the Knights of Columbus for over 50 years. He also served on the Pulaski County Special Services Board for several years. Most importantly, Tom’s wife, children and extended family were important to him. He loved spending time with them every chance he could, especially the grandchildren. He loved them all dearly and would do anything he could for them. He was truly a family man. Tom will be sadly missed, but fondly remembered by all those who knew and loved him. He leaves to cherish his memory, his wife: Midge Bohrer of the home; Creg Bohrer (Flo) of Steamboat Springs, CO, Travis Bohrer (Chrystal) of Waynesville, MO, and Christy Rogers (Tom) of Arlington, VA; six grandchildren: Ashley Bohrer of St. Robert, MO, Brittany Bohrer (Mike Kozar) of Kansas City, MO, Taryn Bohrer of Steamboat Springs, CO, Faith Bohrer of Waynesville, MO, Nicole Neyman of Arlington, VA and Thomas Neyman of Arlington, VA; one brother: Bill Bohrer (Peggy) of Gastonia, NC; two sisters: Joan Melzer (Bob) of Wichita, KS and Becky Hart (Bruce) of Nashville, KS; several nieces, nephews, other relatives and many friends. Mass of Christian Burial was held at 1:00 p.m. Friday, December 13, 2019 in the St. Robert Bellarmine Catholic Church of St. Robert, Missouri with Father John Groner officiating. Music was provided by Mike Beattie, Mary Letcher, Charlene O’Neill and Evelyn Horine. Assisting Father Groner was Micky Letcher and Jim Nalley and readers, Mark Davis and Dagmar Dodds. Serving as escorts were Creg Bohrer, Travis Bohrer, Dr. Tom Rogers, Thomas Neyman, Karl Wilking, Jim Wilking and Howard Feldmeier. Serving as honorary escorts were Jimmy Martin, LeRoy Tronstead, Steve Dougherty, Dick Bales, Jim Bales and Tommy, the mule. Burial with military honors followed in the Resurrection Cemetery of St. Robert, Missouri. Military honors were provided by the Missouri Honors Team. Services were under the direction of Memorial Chapels and Crematory of Waynesville / St. Robert. Memorial contributions may be made in memory of Tom Bohrer to Genesis "A Place of New Beginnings", Janet's Wish or Good Samaritan Boys Ranch of Brighton, MO and may be left at the funeral home.

Thomas "Tom" Joseph Bohrer, son of the late Joseph A. Bohrer and Anne Martha (Traffas) Bohrer, was born August 7, 1940 in Nashville, Kansas. He passed away the morning of Monday, December 9, 2019 in the Life Care Center of Waynesville having... View Obituary & Service Information

The family of Thomas "Tom" Joseph Bohrer created this Life Tributes page to make it easy to share your memories.