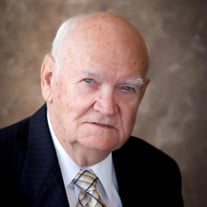 Thomas “Tom” Sylvester Lynch, son of the late Phillip Remi Lynch and Leoti Art (Welsh) Lynch, was born June 15, 1931 in Macon County, Missouri. At the age of 10, Tom and his family moved to the Waynesville area where they lived in a tent the first winter. He graduated from Waynesville High School as valedictorian of the Class of 1951. Tom served with the National Guard for eleven years beginning at the age of sixteen. On June 14, 1952, in St. Robert, Missouri, Tom was united in marriage to Karalene Prewitt. They shared over 64 years of marriage together before Karalene preceded him in death on March 16, 2017. Tom and Kay were blessed with three children: Joe, Ann, and Ken. The family hosted Ertugrul Yilmaz, an AFS student from Turkey, for a school year. Years later, Ertugrul hosted Tom and Kay for an extended tour of Turkey. Tom liked to stay busy, and he certainly did. He served as a partner, along with his brother and father, for 51 years in Lynch’s Furniture. He and his brother Vic also built the Spur Shopping Center and owned and operated Spur Furniture for many years. After his retirement, Tom worked with his grandson Clinton in home rehab projects for several years. Tom took civic engagement seriously. He served on several committees and boards. He served as an alderman and mayor of St. Robert and in his mid-20’s even filled in as St. Robert judge for a short period. He was active in the Lions Club for many years. Tom helped found the Committee of 50 and for several years, he ran the Chamber of Commerce Christmas tree sales. He served two terms on the Waynesville R-VI School Board. During that time, he and Herman Vaughan initiated the practice of a Fort Leonard Wood liaison sitting with the school board at meetings to improve communication and relationships with Fort Leonard Wood. Tom enjoyed sports, especially playing basketball. He was on the Waynesville High School team that took second place in the state tournament in 1951. He continued to play on a recreational team as an adult, until he tore a tendon and Dr. Nickels told him he was too old to be playing basketball. He was an avid fan of the St. Louis Cardinals and loved watching them either in person or on television. Tom loved his family tremendously. He was so very proud of them and if you asked how his family was, his face would light up as he started telling you about his grandchildren. Until his health began to fail, Tom was a faithful member of the St. Robert Bellarmine Catholic Church. He was active in the Knights of Columbus and was instrumental in the construction of their new Fellowship Hall. Tom passed away Friday, October 15, 2021 in the Cedar Pointe Care Center of Rolla, Missouri having attained the age of 90 years. He will be sadly missed, but fondly remembered by all those that knew and loved him. Tom leaves to cherish his memory, his three children: Joe Lynch (Hannah) of Springfield, MO, Ann Jarrett of Waynesville, MO, and Ken Lynch (Sharon) of Kingdom City, MO; six grandchildren: Suzanne Boyd (Brian) of Milwaukee, WI, Bekah Teller (Jesse) of Springfield, MO, Joanna Fredrick (Matt) of Ballston Spa, NY, Jessicca Moore (Marcus) of Petaluma, CA, Clinton Jarrett (Lisa) of Laquey, MO, and Sean Lynch of Fulton, MO; fifteen great grandchildren; one brother: Vic Lynch of Waynesville, MO; two sisters: Annora Davis of Linn Creek, MO and Sue Thomas (Jerry) of St. Clair Shores, MI; several nieces, nephews, other relatives, and friends. In addition to his parents and wife, Tom was preceded in death by one brother: Al Lynch; sister-in-law: Barbara Lynch; brother-in-law: Gordon Davis; and son-in-law: John Jarrett. Even though he is gone from our sight, his work ethic, sense of community pride, and love for family will live on in our hearts forever. Memorial contributions may be made in memory of Tom Lynch to the Pulaski County Fair Board or to the St. Robert Bellarmine Catholic Church Building Fund and may be left at Memorial Chapels and Crematory of Waynesville / St. Robert.

Thomas &#8220;Tom&#8221; Sylvester Lynch, son of the late Phillip Remi Lynch and Leoti Art (Welsh) Lynch, was born June 15, 1931 in Macon County, Missouri. At the age of 10, Tom and his family moved to the Waynesville area where they... View Obituary & Service Information

The family of Thomas "Tom" Sylvester Lynch created this Life Tributes page to make it easy to share your memories.