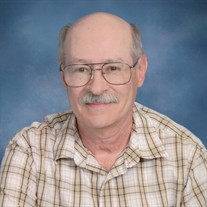 Tom was the son of Curtis Lee Scheerer and Mary Virginia (Harner) Scheerer, he was born November 14, 1953, in Joplin, MO, and died March 22, 2017, at home in Richland, MO, at the age of 63. Tom was preceded in death by his father Lee in 1995 and his mother Virginia in 2014. He is survived by sisters Janice Amelang (Karl) of Germantown, TN, and Julie Scheerer of Rockville, MD, nephews Hans (Sara), Kurt, and Franz Amelang, all of Memphis, TN, and grand-niece Ilse Amelang, of Memphis, TN. Also surviving are his uncle and aunt, Joe and Mary Ruth Harner of Rogers, AR, and numerous cousins and other relatives and friends. Tom spent his early years in Joplin, attending Irving Elementary school. Summers were enjoyed at his Grandfather Harner’s home on Big Sugar Creek, fishing, hiking, and spelunking. The family bought the local Dustin's Rexall Drug store and moved to Richland in 1965. He attended Richland Middle School and was a 1971 graduate of Richland High School where he played on the school baseball team. From Richland High he attended the University of Missouri at Rolla (now Missouri University of Science and Technology, MUST), graduating with a Bachelor of Science in Mechanical Engineering in 1975. He worked in industry on manufacturing processes. As an employee of Boeing Aircraft in Wichita, KS, he brought innovation to aircraft manufacturing, including tri-laser precision cutting of metal exterior panels. Most recently, he was collaborating with Joe Strain (former resident of Richland, MO, currently in St. Peters, MO) on a solar-powered water purification and energy generating system prototype. Tom returned to Richland in 2008, and had a great interest in local history, landmarks, and family genealogies; photography; automobiles, especially the Ford Mustang (Wichita, KS, Mustang club founder and president); and was a huge fan of St. Louis Cardinal Baseball team. Tom was a devoted member of the Richland United Methodist Church, he contributed generously of his time to church activities such as running the audio visual for services, served as a leadership volunteer, recently was appointed trustee chair, and was also a consultant on the construction of the new church building. Tom had a deep love for his church and considered everyone there an extension of his family. Donations in memory of Tom Scheerer may be made to the Richland United Methodist Church or the American Diabetes Association. A Celebration of Life Service was held at 2:00 p.m., Sunday, April 2, 2017 in the Richland United Methodist Church of Richland, Missouri with Pastor Mitch Henson officiating. Soloist, Merlene Smith sang “It Is Well with My Soul.” Pianist, Rosalyn York accompanied the congregation as they sang, “How Great Thou Art” and “Nearer MY God to Thee.” Serving as escorts were Hans, Kurt and Franz Amelang, Joseph Strain, Ed Boyd and John Snead. Services were under the direction and care of Memorial Chapel of Richland. Online condolences may be left at www.memorialchapelsandcrematory.com

The family of Thomas Byron "Tom" Scheerer created this Life Tributes page to make it easy to share your memories.

Tom was the son of Curtis Lee Scheerer and Mary Virginia (Harner)...