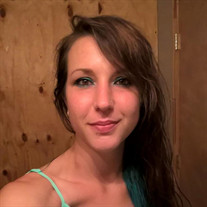 Tiana Marie (Schwickerath) Hobbs, daughter of Todd Allan and Sheri Lyn (Kirk) Schwickerath, was born December 29, 1988 in Fort Hood, Texas. She passed away Thursday, February 27, 2020 in her home at the age of 31 years. Due to her father being in the military, Tiana and the family were transferred to different duty stations during her life. They were stationed in Fort Hood, Texas; Chatsworth, California; Kaiserslautern, Germany; Fort Riley, Kansas; Vicenza, Italy; and then came to the Fort Leonard Wood, Missouri area in 2005. Tiana graduated from Waynesville High School with the Class of 2007. Tiana furthered her education and graduated with an Associate’s Degree in Accounting from Ozark Technical College in 2009. In 2012, Tiana was united in marriage to Cody Hobbs. Tiana worked as a waitress, bank teller, math tutor, secretary and was a very good handyman. In her spare time, she enjoyed designing art displays made with rocks, ornament making and designing jewelry. Most importantly, Tiana was blessed with two children, Amelia and Coraline. She loved them dearly and loved to see their smiling faces. Tiana is survived by her parents: Todd and Sheri Schwickerath of St. Robert, MO; two children: Amelia and Coraline Schwickerath, both of St. Robert, MO; one sister: Shawnee Schwickerath of St. Robert, MO; grandparents: Tom and Pat Schwickerath of New Hampton, IA; grandmother: Jenny Kirk of New Braunfels, TX; fathers of her children: John Davis of Nixa, MO and Cody Hobbs of St. Robert, MO; numerous aunts, uncles, cousins, other relatives and friends. Tiana was preceded in death by her maternal grandfather: “Papa” Charles W. Kirk; aunt: Sandra Lee “Sandi” (Schwickerath) Rieck; two special great uncles: Mark “Mick” Schwickerath and Rodney Kirk; a great-great grandmother; and several great grandparents. Even though she is gone from our sight, her memory will live on in our hearts forever. Private family services were held in the St. Mary’s Cemetery of New Hampton, Iowa. Arrangements were under the direction of Memorial Chapels and Crematory of Waynesville / St. Robert and Conway-Markham Funeral Home of New Hampton, Iowa. Memorial contributions may be made in memory of Tiana Hobbs and may be left at Memorial Chapels and Crematory of Waynesville / St. Robert.

Tiana Marie (Schwickerath) Hobbs, daughter of Todd Allan and Sheri Lyn (Kirk) Schwickerath, was born December 29, 1988 in Fort Hood, Texas. She passed away Thursday, February 27, 2020 in her home at the age of 31 years. Due to her father... View Obituary & Service Information

The family of Tiana Marie Hobbs created this Life Tributes page to make it easy to share your memories.