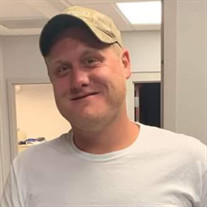 Timothy Michael Wood was born on February 26, 1992, in Rolla, Missouri, and went home to be with God on the morning of Thursday, November 25, 2021, in St. Clair, Missouri. He leaves behind to cherish his memory his mother, Dawn Bowling of Richland, Missouri; his grandmother, June Latham of Richland, Missouri; step- father, Donald Bowling of Richland, Missouri; one sister: Shannon Ogle of Richland, Missouri; two nieces Shaylin and Gabriella Ogle; one nephew, Bryce Ogle; several aunts, uncles, other relatives, and friends. Tim was preceded in death by his grandfathers, Elmer “Dee” Latham, and George Richard Wood, step-grandparents, Henry, and Barbara Bowling. Tim graduated from Richland High School. He especially liked to fish when he could, and always enjoyed being outdoors with nature. In his teens he would work hay fields for local farmers, bag groceries & stock shelves at the local store, help in a local upholstery shop (something he always stayed interested in). He had moved to North Dakota several years ago to work the oil fields as a laborer, he also learned to work on heavy equipment and most recently was working on a crew building large cell towers across the north. Timothy was always described as "hard working", he didn't like idle hands, he wanted to push himself to know and learn as much as he could about as many things as possible. Tim attended John 3:16 Ministry in 2017, it was at this time he professed his acceptance of Jesus Christ. No time in his life was more impactful than his time spent at the ministry. He was called to help & serve others, he knew the life of struggling with addiction and he was so proud of the work he did there. He was the most vibrant and lively during his time at the ministry, he found peace in God's forgiveness. Tim didn't always make the best choices, but if you were blessed enough to be someone he loved, you can be certain you knew it! He was compassionate and loyal; fiercely and openly loved his people. His family and friends will miss him greatly. If Tim could be here today he would want you to know that tomorrow is promised to no one, and that life is too short, time is too precious, and the cost is too high to dwell on what might have been…he would want you to spend more time with the ones you love and just be happy. A graveside service was held Friday, December 3, 2021, in the Oaklawn Cemetery, Richland, Missouri with Pastor Alva Shirley and Pastor Matt Brady officiating. A special letter and poem were also read. Music selections included, “Always Be Humble and Kind,”, “Give Heaven Some Hell,” and “Amazing Grace my Chains are Gone.” Family and friends served as escorts. Services were under the care and direction of Memorial Chapel of Richland. Memorial contributions may be made in memory of Timothy Michael Wood to left at the Memorial Chapel of Richland. Online condolences can be sent at www.memorialchapelsandcrematory.com.

Timothy Michael Wood was born on February 26, 1992, in Rolla, Missouri, and went home to be with God on the morning of Thursday, November 25, 2021, in St. Clair, Missouri. He leaves behind to cherish his memory his mother, Dawn Bowling of Richland,... View Obituary & Service Information

The family of Timothy Michael Wood created this Life Tributes page to make it easy to share your memories.