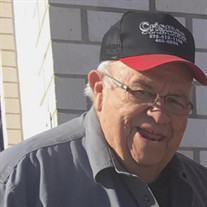 Tony Leland Crismon, son of the late William Clarence and Freeda (Storie) Crismon, was born May 14, 1940 in Waynesville, Missouri. He went home to be with his Lord Monday, May 27, 2019 in the General Leonard Wood Army Community Hospital of Fort Leonard Wood, Missouri having attained the age of 79 years. Tony was raised in Colley Holler, or as he would put it “born in Waynesville, but bred in Colley Holler”. He spent his whole life in the Holler and was very proud of that fact. He was the official Colley Holler weatherman and night watchman. On September 3, 1961, Tony was united in marriage to Linda Kay Jett in Iberia, Missouri. They shared over 57 years of marriage together and were blessed with two children: Karen and Tony Dean. Tony worked hard his whole life. He was self-employed in construction and helped with several housing subdivisions in the area. He also owned and operated his farm and enjoyed working on the land with his livestock. Tony was very involved in the community. He served on the Laquey R-V School Board for 28+ years and you could count on him to fight for the school to make it the best for the kids. He also served as a Pulaski County Commissioner, board member of the Pulaski County Water District, and the COMC Medical Board. Tony was also a member of the Richland Masonic Lodge #385 AF & AM. He was also an “official member” of the Liars & Good Old Boy Club that met every Monday at Smitty’s. As a young boy, Tony made a profession of faith and was currently a member of the Idumea Baptist Church. Tony never met a stranger. He thoroughly enjoyed visiting with everyone he came in contact with, even if they had never met. He was always telling stories and you could sit for hours and just laugh until you cried. He will be sadly missed, but his memory will live on in our heart forever. Tony will be fondly remembered by all those who knew and loved him. He leaves to cherish his memory, his wife: Linda Crismon of Waynesville, MO; two children: Karen Stark (Jim) of Waynesville, MO and Tony Dean Crismon (Amanda) of Waynesville, MO; seven grandchildren: Nick Rollins (Ariann) of Columbia, MO, Corey Rollins (Miwako) of Nixa, MO, Riley Rollins (Julie) of Houston, TX, Tony Dean Crismon, Jr. of Waynesville, MO, Josh Post, Jason Post and Michael Bainter all of Waynesville, MO; five great grandchildren: Zimri, Maya, Machaih, Joseph and Joshua Rollins; one brother: Gilbert Crismon (Patsy) of Jasper, MO; several nieces, nephews, other relatives and friends. In addition to his parents, Tony was preceded in death by his sister: Mary Ann Miller; and one brother: Carroll Crismon. Funeral services were held at 10:00 a.m. Friday, May 31, 2019 in the Buckhorn Baptist Church of Waynesville with Pastor Danny Graves officiating. Gilbert Crismon, Tony’s brother, sang “Peace in the Valley” and “The Last Mile of the Way”. Serving as escorts were Tony Dean Crismon, Jr., Josh Post, Jason Post, Michael Bainter, Nick Rollins and Corey Rollins. Serving as honorary escorts were J.T. Roberts, Tom Doyle, Dennis Thornsberry, Buzz Hendrix, Jon Rand and Bill Taylor. Burial followed in the Buckhorn Cemetery of Waynesville. Services were under the direction of Memorial Chapels and Crematory of Waynesville / St. Robert. Memorial contributions are suggested in memory of Tony Crismon to the Laquey R-V School District or the Idumea Baptist Church and may be left at the funeral home.

Tony Leland Crismon, son of the late William Clarence and Freeda (Storie) Crismon, was born May 14, 1940 in Waynesville, Missouri. He went home to be with his Lord Monday, May 27, 2019 in the General Leonard Wood Army Community Hospital of... View Obituary & Service Information

The family of Tony Leland Crismon created this Life Tributes page to make it easy to share your memories.